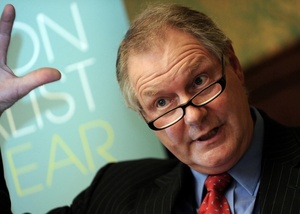 Further to the ‘matter‘.

Given that IBRC is state-owned, [Catherine] Murphy was suggesting that the Irish people have been subsidising O’Brien’s interest payments on massive loans for no clear reason.

Although I have no idea whether or not her claims are correct, they are protected by parliamentary privilege (as in Britain).

…the extension of the terms of the injunction to cover a parliamentary speech has shocked the Irish media community, not to mention the public.

It had extraordinary effects. For example, RTÉ reporter Philip Boucher Hayes tweeted yesterday afternoon that the Drivetime show was about to play Murphy’s speech, but the piece was not broadcast and his tweet was later deleted.

The report on the matter by Ireland’s best-selling daily newspaper, the Irish Independent, said: “Mr O’Brien successfully stopped RTÉ from broadcasting the details which Ms Murphy raised in the Dáil”.

Dáil should be recalled next week to reassert a basic principle. Dáil speech and the reporting of it protected by absolute privilege

Under Standing Orders- at request of Taoiseach, Ceann Comhairle may summon Dáil for an earlier date than that fixed on an adjournment.

‘It Is Right To Be Angry In The Face Of Injustice’

51 thoughts on “Always A Privilege”