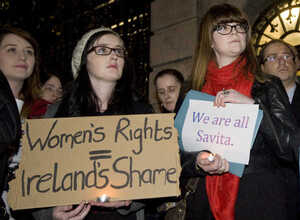 Last week, the Irish government got hammered three times because of the way it mistreats its citizens: by Amnesty International on abortion, by the Rape Crisis Network on funding cuts, and by the United Nations on a poor human rights record under austerity. We will have to organise and push back, because rights are not granted—they are won.

(1) First, Amnesty International released a thundering report on abortion, entitled “She is not a Criminal”. It says that Ireland’s approach to abortion is “deeply rooted in religious doctrine”.

Let’s start with this line that summarises it nicely: “The Irish state and religious institutions enforce harmful gender stereotypes and have institutionalized violence against women and girls”.

Or this one: “Ireland’s abortion law continues to criminalize abortion in cases of rape, incest and fatal or severe foetal impairment, perpetuating the suffering of survivors of sexual violence and of women and their partners already grappling with a devastating loss”.

And a last one: “The long history of the criminalisation of abortion in Ireland is part of a broader social and political context in which the state and religious institutions have subjected women and girls to strict, punitive social controls around their sexuality”.

The report underlines that human rights bodies worldwide have repeatedly maintained that “restrictive laws on abortion, including those that exist in Ireland, violate women’s and girls’ rights to life, health, privacy, non-discrimination and freedom from torture and other ill-treatment”.

Ireland’s record is atrocious: it “has long had one of the world’s most restrictive abortion laws” and has refused to reform its laws despite repeated criticisms from numerous human rights bodies.

The recent reform of the Protection of Life During Pregnancy Act 2013 has brought no significant change. In fact, in the first case of denial of a lawful abortion under the new rules (the Ms. Y case), this is what happened: “health care providers coerced a young, suicidal woman, pregnant as a result of rape, who qualified for a lawful abortion on suicide grounds, to continue with her pregnancy to viability and then deliver by caesarean section”.

There is thus a lot of room for improvement on this front.

(2) Secondly, Tusla, the State’s Child and Family Agency, decided to end funding for the Rape Crisis Network of Ireland (RCNI), which is the umbrella body for the country’s 16 rape crisis centres. Last year, they received 18,000 calls, texts and emails and supported 1,900 people through counseling. The cut amounts to €250,000—70% of RCNI’s income.

This comes on top of significant cuts to rape crisis centres around the country since 2008 when austerity started. For example, the annual budget of the Dublin Rape Crisis Centre was cut by €300,000, about 30% of its budget.

Other Centres have been targeted in a similar fashion. Last year, two Rape Crisis Centres (in Clare and Tipperary) even had to close temporarily because of government cuts to their funding.

Those who believe that cutting services to rape victims will “increase Ireland’s economic competitiveness” and will “reassure the global markets” probably believe anything.

A more sensible explanation was provided by the Irish Examiner: it called the cuts “regressive, dangerous and almost a tacit expression of misogyny”. The cuts say to “rape or abuse victims that this service, one they can turn to in a moment of great crisis, is not regarded as important, much less essential”. It noted that “This society’s record in supporting victims of rape, abuse or crime is not enviable”.

(3) Thirdly, the United Nations examined Ireland’s compliance with its international obligations with respect to housing, education, health, non-discrimination and other issues.

Ireland got hammered again. The UN said a referendum on abortion must be held to protect the rights of girls and women. It also said that the division between Church and State seems “to be a little fuzzy” in this country.

It questioned discrimination in schools against disabled children, non-Christians and Travellers, given that schools are dominated by the Catholic Church.

The effects of austerity were also noted. In the words of the Irish Human Rights and Equality Commission, the burden of austerity measures “has fallen disproportionately on those least able to bear its impacts”. In other words, the most vulnerable have been targeted the most.

There are also concerns about “Direct Provision centres for asylum seekers, nursing homes for older people, day and residential services for persons with intellectual disabilities and care services for children—many of which are run on a for-profit basis”.

Many other examples could be added, but it is clear that the government is not in the business of caring about Irish citizens.

The trap in which we must not fall is to sit back and hope that the government will reflect on its actions, recognise its mistakes, and then choose to rectify the situation. Politicians know perfectly well what is going on—they are the ones doing it! In any case, it’s rather obvious that closing a rape crisis centre will affect rape victims. Or that cutting government services will affect those who depend on them.

Therefore, the point is not to “talk to power” and explain to the government that what it is doing is wrong. Popular pressure needs to force political leaders to change what they do. Because rights are won through social action. They are not granted by the powerful out of generosity.