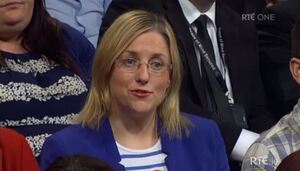 You’ll recall how the UN Committee on Economic, Social and Cultural Rights has called for Ireland to hold a referendum on abortion.

Further to this, Claire Byrne spoke with Cora Sherlock, of the Pro-Life campaign on Morning Ireland this morning.

Here’s what was said…

Claire Byrne: “We heard earlier today that the UN Committee on Economic, Social and Cultural Rights has recommended that Ireland hold a referendum on abortion and that the Government should clarify what constitutes a real and substantial risk to the life of a woman – that’s under the 2013 Protection of Life During Pregnancy Act. Cora Sherlock is the deputy chair of the Pro-Life campaign. You’re very welcome Cora, thank you for joining us in the studio. You heard what the member of the UN Committee Olivier De Schutter had to say earlier this hour. He says that he wants Ireland to have a debate essentially. What do you think?”

Cora Sherlock: “Well I think we’re all in favour of debate, once it is an honest and open debate, once it takes into account all of the facts and all of the true facts. One thing that I would say about what Professor Olivier said there, I noticed that he didn’t fully answer the questions, as far as I could see, about whether or not abortion is a human right because, as we all know, there is no right to abortion in international human rights law – what there is is a right to life and that’s enshrined in the Universal Declaration of Human Rights.”

Byrne: “He did talk though about the right of women to make choices, about their pregnancy which he said was very restrictive in Ireland, as far as the UN committee is concerned.”

Sherlock: “Yeah I mean I heard that but I’m not sure how he could consider the law in Ireland, the 2013 Act, to be restricted because that is an act, let’s remember, allows abortion for the full nine months of pregnancy where there is a threat of suicide and that is not based on any medical evidence. So if these recommendations from the UN are coming from the point of view that that is restrictive, then I think that the [UN] committee needs to go back and look at exactly what the 2013 act says because it’s not restrictive in any way and that is a fundamental error.”

Byrne: “But what about discrimination? Discrimination on the grounds that if you have the cash, you can travel to the UK and you can have an abortion. If you don’t you can’t.”

Sherlock: “I think abortion is the ultimate discrimination, it discriminates against the most vulnerable members of our society, the unborn, because what we’re talking about is ending the lives of human beings who haven’t had a chance to speak for themselves yet.”

Byrne: “But it’s a choice for women who have money to go to the UK and do it.”

Sherlock: “Well, you know, I mean I don’t know that we should support a choice to end lives. I mean we all have choices that are limited by society because they impact on other people’s rights and that’s what we’re talking about here. The ultimate way you can impact on someone else’s life is to end it and that’s what we’re talking about with abortion – actually ending a human life that has already begun. One way that I would agree with Professor Olivier, I noticed that he said, at the end of his interview, that he would like a debate to happen in Ireland, where we look at the experience of other countries and I would very much like to see that happen because when you do look to other countries, like the UK, for example, you see that abortion is fully legal, right up to birth where there is a disability diagnosed and that disability can be something like Down syndrome. 92% of all babies diagnosed with Down syndrome are aborted in the UK. We’ve got the horrific human rights abuse in the UK and in other countries where babies are born alive and left to die after so-called botched abortions.”

Sherlock: “These are babies who survive the abortion..”

Byrne: “But you can’t reference malpractice, I mean we could talk about that in every element of  maternity care and we..”

Sherlock: “This is not malpractice this..”

Byrne: “You wouldn’t be saying, if an operation wasn’t done properly, then nobody should have access to it.”

Sherlock: “No but this is not the same as an operation to try and save a person’s life. These are botched abortions where the intention to end the baby’s life has not been successful and the baby is left, without medical care, to die on their own. That happened 66 times in one year alone in the UK and, I have to say, I take issue with the fact that the UN Committee and various UN Committees have now told Ireland how they think Ireland should, how the people of Ireland should proceed in the area of abortion while they ignore those kind of human rights abuses. So, talk to us about a debate but look at all of the facts.”

Byrne: “Do you think then that the UN is just a liberal organisation who wants to interfere, is that what you’re saying?”

Sherlock: “What I’m saying is that the people of Ireland inserted the right to life of the unborn in 1983 and I don’t think it’s appropriate for the UN to talk about taking an opportunity to revisit the abortion debate.”

Byrne: “1983 is a long time ago, I mean the women of child-bearing age, in Ireland now, I think it’s about one and half million of them, haven’t had a say on that issue because it happened so long ago.”

Sherlock: “Well, you know, that’s an interesting point that’s put to me by  a lot of people but there’s a couple of things about it. Firstly, the Universal Declaration that I talked about there was inserted in 1948 so it’s that long ago and that talks about the preamble, about protecting the inherent dignity and the equal and inalienable rights of all members of the human family..”

Byrne: “Do you not think thought the women of today should have  say over their rights when it comes to pregnancy..”

Sherlock: “The point I’d make Claire is that we have to acknowledge the fact that there are many people, tens of thousands of people, probably listening to this programme, some of them who are alive today because of the 8th amendment. We’re contacted in the Pro-Life campaign all the time by people who will contact us after debates like this and say, ‘I had an abortion appointment made in the UK and because it took me two days extra to get there, I changed my mind and my daughter is now alive today.”

Byrne: “Cora we’ll have to leave it there but thank you very much for joining us.

No Choice: The Legacy Of The X Case