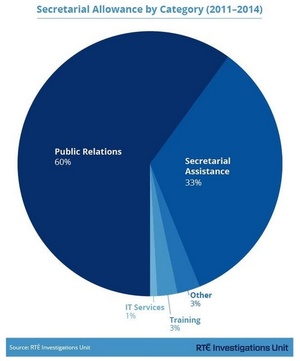 The company that fared best from the special secretarial allowance was the Communications Clinic, a well-known PR firm run by Today FM radio host Anton Savage, his mother Terry Prone, and her husband Tom Savage (a former chairman of RTÉ). In total, the company was paid €211,826 by a variety of government Ministers including Children’s Minister James Reilly, Justice Minister Frances Fitzgerald, and the now-EU Commissioner Phil Hogan.

Ms Fitzgerald for instance has paid the firm a sum of between €1,815 and €1,845 per-month during her time both at the Department of Justice, and before that, at the Dept of Children. Dr James Reilly pays a monthly fee of 1,845, while the monthly fee for Phil Hogan – when he was Minister for the Environment – was €2,214. The government chief whip Paul Kehoe also paid a once-off fee of €18,500 to the Communications Clinic in 2012 for public relations.

What Fresh Madness Is This?

When You Ask A Question 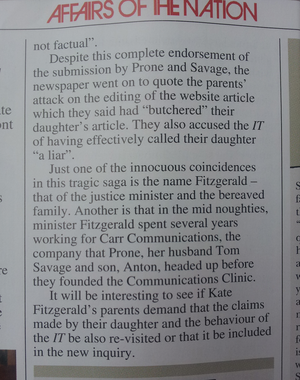 18 thoughts on “Wages Of Spin”