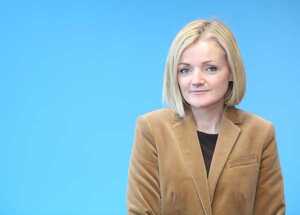 Some morning, in fairness.

Gavin Jennings:“Elizabeth Arnett, less than half of households have paid up, do you accept that a clear majority have now said no to water charges?”

Elizabeth Arnett: “Well I think we’re six weeks in to the billing process for water services and to date 675,000 households are paying, which means that two million people woke up this morning, turned on their tap and flushed their toilet and they’re paying for that service.
It’s 46% of the revenue we targeted for this first quarter of billing so clearly we do have work to do, but I will say that 12 weeks in with no reminders having been sent out that we are very much in line with the expectations as to where we thought we would be at this point in time. UK utilities, which have been sending out water charges bills for over 20 years have on average a 3 month waiting period before customers pay their bill, that’s the average time 20 years into their billing process; we’re 12 weeks in we have sent no reminders and we have 46% of the revenue in. Now it’s a solid start, but clearly we have to move forward from here.”

Jennings: “A solid start? Less than 1/2 of people have paid, a clear majority have rejected water charges. Do you accept that?”

Arnett: “I don’t accept that this is an indication of a rejection. I think that 12 weeks in with no reminders issued to people, no sanctions….”

Jennings: “Representatives of your company or indeed from the government have been on national radio and television regularly over the last couple of months reminding people when they had to pay their water charges.”

Arnett: “Well let me tell you what utility companies do, that may be what governments do but when they issue bills to customers they also follow up with reminders and utility experience will tell us that reminders are what drives people to pay and what drives increases to pay. We didn’t issue any reminders as part of this billing cycle, in fact we know that up to 5% of our customers didn’t actually receive bills because we don’t have their information and taking that mitigating factor into account we’re almost half way where we needed to be and where we expected to be This is the first time this charge has been issued as a bill and the first time people have received this and over the last 12 weeks we’ve taken 140,000 phone calls from our customers engaging with us about the bill, to understand it, to get into the process of paying the bill. It does take time for new charges to bed down and we accept that and we have put in place from the outset financial facilities to ensure that we are fully funded by 2015 because we expect to be here.”

Jennings:“How many did you expect to pay by the end of the first billing period?”

Arnett: “Well it’s very difficult to put a figure on this because this is the first time.”

Jennings: “Did you have an expectation?”

Arnett: “No, because this is the first time. What we did expect that we wouldn’t have everyone paying, and that we needed to have a facility put in place…”

Jennings: Did you have a target?

Arnett: “No. We haven’t a target specifically set for the first bill. What we have is by 2015 a target of €271 million from domestic customers.”

Jennings: “Of which you have €30 million by the end of June?”

Jennings: ‘Why do you think that less than 1/2 of people have paid?”

Arnett: “Well, I think the first thing I would say is to thank those people who have paid, and the first thing I would say is that there will always be an issue in terms of people who cannot pay and will not pay or won’t pay. For those people who cannot pay there is a very important message today, this bill, the maximum you owe today is 64 Euros 11 cents, the minimum payment we will take today, from any day, is 5 Euros, so now is the time to take control of that bill.
The conservation grant – and 1.4 million households have registered for that, 1.1 of which are Irish Water customers, will be paid in September and that can be used to help reduce the bill, 4 out of 10 people who have a meter are paying, are billed substantially less than the 64.10 or the 40 Euros, so for those people conserving water with a meter and using the facilities that are available that’s the message to them, for those people who will not pay there’s an important message here, nobody this morning is saying we don’t need to invest in water services, that we don’t need to address the 49% leaks, that we don’t need to lift boiled water notices as we have in Roscommon recently, that we don’t need to address the head room or the lack of waste water treatment in 44 towns, we need to invest in water services, domestic revenue is giving us an opportunity to do that.”

Jennings: “For those who haven’t paid and who receive their next bill in the next couple of months, it’s going to be double, isn’t it, because it will be for two billing periods, but if they don’t pay, they don’t pay the next one and they don’t pay the fourth one it won’t be, correct me if I’m wrong, until the 5th one that they incur a penalty?”

Jennings: “So if I don’t pay this bill my second bill my third bill or my fourth bill you won’t do anything?”

Arnett: “Oh, we will be contacting customers seeking payment.”

Jennings: “But I’ll still get my water without having paid for it?”

Arnett: “You’ll still get your water.”

Jennings:“Will I still get my grant?”

Jennings: “So just to be clear, if I don’t pay this bill, my second bill, my third bill and my fourth bill, I’ll continue to receive water, I pay any any penalties and I’ll still get 100 Euro from the government.”

Jennings: “If I don’t incur any penalty for not paying my first, second third or fourth bill and I get 100 Euros from the Government, why would I change my mind why would more than half of households who haven’t paid their water bill change their mind.”

Jennings: “But you’re fully funded into next year.”

Arnett: “In terms of leakage, in terms of capacity of water supply in terms of risk of water supply and in terms of waste water. So we have to do things differently. The domestic revenue stream gives us the opportunity to leverage additional funding from capital markets in order to improve the network, no one is disputing that today, no one is coming on Morning Ireland this morning saying we don’t need to address…”

Jennings:“You’re not short of money for this year”

Arnett: “We absolutely do need ,the provision is a working capital facility, in order to manage cash flow a new business starting up will always put that facility in place because there is always a lag phase between the time you send your first bill and the time you get paid, any new start-up company will understand that so you put in place a working capital facility it’s an interest bearing loan so we have to pay it back…”

Jennings: “Are you going to spend more money on advertising to convince the other half of households who haven’t paid yet?”

Arnett: “The first thing we will do in terms of billing is we will send out the second bill, we know from utility eperience that when second bills arrive people start paying.”

Jennings: “Are you going to spend more on advertising”

Arnett: “We will be communicating to people…”

Jennings: “How much have you spent on advertising so far?”

Arnett:“As part of the previous campaign we spent over 600,000 on advertising.”

Jennings: “How much more are you going to spend?”

Arnett: “I haven’t finalised the budget but we will be communicating…”

Jennings: “But you are going to spend more”

Arnett:“Yes, we will be communicating on all of the issues People have to understand this is a charge for a service and I think that’s an important message, we are providing water and waste water services and we need to invest and improve and provide good communication to everybody.”

Jennings: “Do you think the sanctions should be higher?”

Arnett: “No, I think actually if you take a sensible view, this this is a new charge for people and it’s on top of what has come at us in the previous years its’ not a popular charge, we accept that, and it is going to take time for this to bed down, people have to get used to managing this as part of their household budget and I think it’s reasonable that time frame for people do do that and I think what to say to people is to take control of that now, the most you’d owe us is 64.10, if you’re conserving, less than that, and what I would say is now is the time to engage with us…”

Jennings: “But if I don’t you’re not going to come on to me until the end of the 5th billing cycle?”

Arnett:“We add additional charges at the end of that but we are going to be reminding people to pay ,we do know from experience that does generate revenue.”

Jennings: “Elizabeth Arnett from Irish Water, thank you for speaking to us.”

70 thoughts on “Drowning In Delusion”