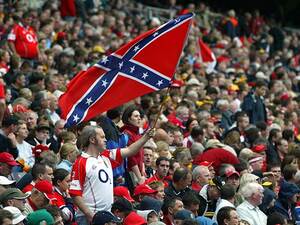 Cork-based singer Karen Underwood explains why, as a black American, the confederate flag used by GAA fans supporting the ‘rebel county’ is offensive.

Meanwhile, In The Queue At The Working Abroad Expo (Cork)

94 thoughts on “Confederate Of Dunces”