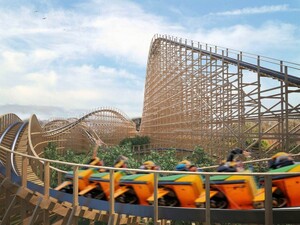 Shouldn’t YOU be on it?

The Summer of 2015 has been a monumental one for Tayto Park, Ashbourne as they debuted Europe’s Largest Inverted Wooden Rollercoaster, The Cú Chulainn Coaster!

Along with the rollercoaster, Tayto Park has welcomed seven new additional attractions! Ranging from the fast paced ‘Air Race’ to the ‘Rotator’, the Honey Pot Roundabout and the ‘Shot Tower’ that will have little ones feeling like they are on top of the world.

To celebrate the exciting Summer season at Tayto Park and the launch of the new wooden rollercoaster, Tayto Park and Broadsheet.ie have teamed up to give readers the chance to win two family passes .

What is the name of the new rollercoaster launched in Tayto Park this Summer?

Yes it really is that easy.

Winners plucked from the ‘hat’ is our working assumption.