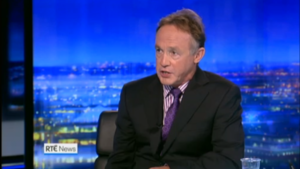 You may recall RTÉ Crime Correspondent Paul Reynolds’ report on RTÉ’s Nine News on Wednesday in which he said more than 20 people are expected to be charged in relation to the protest in Tallaght last November in which Tánaiste Joan Burton was ‘trapped’ in her car.

One of those named in the reported was Socialist Party TD Paul Murphy. Mr Murphy has since made official complaints to the offices of the DPP, the Garda Commissioner and GSOC over the leaking of the information to RTÉ.

An internal Garda investigation is now under way into this leak.

Yesterday, Garda whistleblower John Wilson told Newstalk: “The source of the leak may or may not have come from within an Garda Síochana. It could have very well have emanated from a high level from the office of the DPP.”

This is what was said in the report on Wednesday:

Eileen Dunne: “More than 20 people are expected to appear in court in the coming weeks in connection with a water charge protest in Tallaght last year in which the Tánaiste Joan Burton was trapped in her car for over two hours. RTÉ News has learned that the DPP has directed they be charged with a variety of offences. For more on this, we’re joined in studio by our crime correspondent Paul Reynolds. Paul, can you fill us in on the background first of all?”

Paul Reynolds: “Well Eileen, people will remember that last November the Tánaiste Joan Burton and her assistant were trapped in her car in Tallaght, in Jobstown for about two hours. Their car was surrounded by protesters who were chanting, banging on the car, shouting slogans. Now after that incident, the gardaí began a criminal investigation and almost 40 people were arrested, including juveniles, teenagers and three public representatives. Among those detained were the Socialist Party TD Paul Murphy and two anti-austerity councillors, Kieran Mahon and Mick Murphy. After they are released, they held a press conference outside Terenure Garda Station at which they said, they accused the gardaí, and the Government, of political policing and they said that they were confident that a jury would find them not guilty of any charge, particularly of a charge of false imprisonment. However, the garda investigation continued and a number of other people were arrested.”

Dunne: “So what has the DPP now directed?”

Reynolds: “Well, in total, 40 people were arrested and the gardaí sent a number of files to the DPP in relation to around 30 people, my understanding is 30 files were sent to the DPP for consideration. Now, we have learned tonight that the DPP Claire Loftus has directed that around 20 people, more than 20 people, are to face charges in connection with the incident. Now these charges include allegations of false imprisonment, violent disorder, criminal damage and offences under the Public Order Act. Now, some of those people are due to be charged with some offences but others, I understand, will face multiple charges.

Dunne: “Now I understand that any trial will take place in the circuit court as opposed to the district court. What’s the significance of this?”

Reynolds: “Yeah there had been some public commentary in relation to this because the DPP hadn’t come back within six months of the incident that people may not be charged at all because it would have been statute barred but that only applies to the district court. Charges have to be brought within six months if somebody is to appear before the district court but this doesn’t apply in the circuit court. So the directions have come back and these people, who are to be charged, will face trial on indictment which is before the circuit court. Now the circuit court is different because in the district court, you appear only before a judge, there’s no jury but in the circuit court you may appear not only before  a judge but also before a jury and are entitled to trial before jury. However the penalties, at Circuit Court level, are more severe. Now the gardaí must implement the DPP’s directions so in the next few weeks people may either be arrested  and brought to the courts, they may be arrested and brought to a station to be charged and then given station bail to appear before  a court at a later date or they may be summonsed to appear in court.”