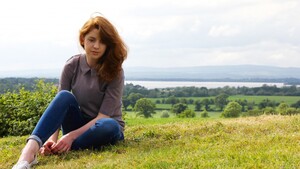 A ‘modern coming of age drama’ about a young Irish woman’s journey to London with her boyfriend to have an abortion starring Iseult Casey (as Maggie),  Shane Murray-Corcoran (as Andy), Pat Shortt, Ardal O’Hanlon, Mary Conroy and Paul Ronan has just wrapped filming.

The independent feature [set in Tipperary, Dublin and London] is written and directed by Tom Ryan, who made the acclaimed Nenagh-based comedy drama Trampoline (2013).

Despite the subject matter, Tom sez:

“We want to show how an unplanned pregnancy can affect both parties in a relationship and we want to do it in a way that isn’t too grim or heavy for an audience, while still giving it the weight that it needs.We are hoping that the film will go some way to showing the issue in a new light.”

Twice Shy will be released in Spring 2016.

To coincide with a repeal of the Eight Amendment.