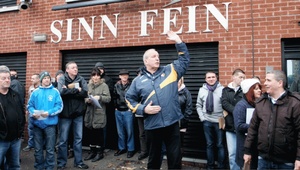 The two other men arrested were veteran Belfast republicans Brian Gillen and Eddie Copeland. The trio were being questioned about the killing of McGuigan outside his house in the Short Strand district of east Belfast in August.

Expressing his concern over Storey’s arrest, McGuinness said: “Bobby Storey is a valued member of Sinn Féin’s core leadership. He has played a leading role in the development of Sinn Féin’s peace strategy and is a longstanding and loyal supporter, defender and advocate of the peace and political processes.”