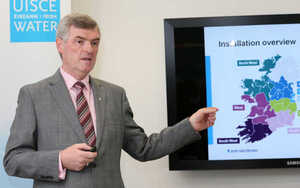 In another colossal waste of money Irish Water will go door to door to find out what they already know.

Our domestic troika (Fianna Fáil, Fine Gael and Labour), just like the European troika (European Central Bank, European Commission and the IMF), always claim that they are in favour of efficiency and a lean public sector while being tough on waste in government.

Last week, events around Irish Water revealed again this not to be the case.

As many as 54% of households still have not paid their water charges, which means a rather low 46% payment rate.

Newly released documents obtained by the Sunday Times show that Irish Water had originally estimated that only 20% of customers would not pay their bills — in other words, boycott has been nearly three times larger than expected. It was also predicted that by now, 1.7 million people would have registered, but in fact there are only 1.36 million who have done so.

Another surprise of the released documents is the relative effectiveness of the protests. John Tierney, Irish Water managing director, stated that they have slowed down the rate at which water meters are installed by as many as 1,000 per month.

Apparently taken aback by those unforeseen events, it has now emerged that Irish Water is undertaking private research to find out why so many people are refusing to pay their water charges, as reported by the Sunday Business Post yesterday. It has hired a private company called Behaviour and Attitudes to conduct a study.

The firm is based in Dublin and specialises in market research. It will reportedly go from door to door in the country to ask people if they have paid their bills, and if not, why not? They will be asked if they agree with the statement, “Why should I pay the bill when everyone else isn’t paying?” and if they believe that “water should be free”.

Irish Water has so far refused to reveal how much the study had cost, but it is obviously a waste, since we already know the answer. It is not difficult to understand that people protest the water charges because they are tired of austerity measures.

Also, Rory Hearne at NUI-Maynooth conducted an excellent study of the motivations of water charge protesters. It found that the main reasons for protesting were that “austerity has gone too far” (60% of respondents), to “stop the future privatisation of water” (59%) and to “abolish water charges” (57%).

Why not simply look at this report rather than spend more money on yet another study that will only confirm the obvious? Maybe Irish Water wants more precise information on why people boycott in an attempt to build their next marketing/propaganda campaign to try to convince people to pay?

A few months ago, it spent €650,000 on an advertising campaign to do just that, or in more polite language from its marketing plan, to generate “credible mass acceptance that there is a need to pay for water”.

The advertising agency Rothco created a short clip that was played on the radio, television, movie theatres and elsewhere for eight weeks. The 60-second clip was entitled “The Story of Water from Cloud to Glass” and can be watched here.

On Irish Water’s website, there is what seems to be a follow-up clip entitled “The Story of Water from Drain to Sea”, which can be watched here. Who knows how much it cost?

Another waste is the ongoing prosecution of water charge protesters by the State, through which 27 people will be instructed to appear before the courts, including Paul Murphy TD.

In this legal operation, statements were taken from 100 Garda members, while countless officers have of course been used everywhere in the country to police communities opposed to the installation of water meters. I am not aware of an estimate of the costs of those operations, but the money wasted could have been spent on homelessness, welcoming refugees, reducing waiting lines in hospitals, etc.

Efficiency principles as commonly understood have thus been thrown out of the window. The only way the above can be conceived as efficient is from the viewpoint of those in power. It is efficient to spend taxpayers’ money on trying to put in jail those who protest, because that might enable the domestic and European troikas to achieve their goals. That means it might be efficient for elites, but not for anyone else.

40 thoughts on “The Efficient Deficiencies Of Irish Water”