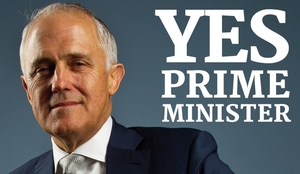 Australian Prime Minister Malcolm Turnbull who has defeated Tony Abbout for Leadership of the Liberal Party.

We have a new Prime Minister. Aus is saved from its [budgie smuggling] version of George W Bush….

7 thoughts on “Turnbull For The Books”