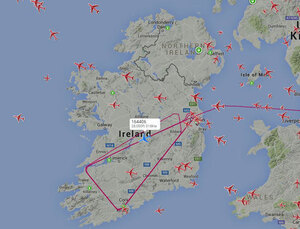 The plane flew over Dublin to Shannon to Cork, and then back to Dublin again in a triangular formation for five hours. …The plane’s transponder – which sends certain information to receivers on the ground – showed it to be a Boeing E6 Mercury, belonging to the US Navy.

It is now believed it may have been a Boeing E3 aircraft [which “provides surveillance, command, control and communications, and is used by the United States Air Force”].

The plane stayed at a constant 28,000 feet throughout its journey over Ireland

Why Did A US Spy Plane Spend Five Hours Over Ireland (Jack Quann, Newstalk)