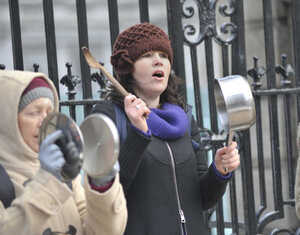 Should you have a kitchen.

Free in an hour?

If you happen to be in the vicinity of the GPO at around 4pm today you might notice that the city center is slightly louder than usual.

A large number of community groups who work with the homeless community are organising a “Pots and Pans” protest march from the GPO to Dail Eireann on the first day government are back from their annual summer hiatus.

The groups include the Irish Housing Network (responsible for the recent occupation of Bolt Hostel), A Lending Hand, Social Workers Action Network, Jacket Off Your Back, an Spreach, Help the Hidden Homeless, Help 4 The Homeless and many many many more.

Keira who is part of the Irish Housing Network and who works with Lending Hand based in Dublin City, says:

“Twice a week on a Monday and a Thursday we go out and feed and clothe the homeless and hidden homeless on our streets and every week it gets worse and worse. Last Monday we fed upwards of 180 people.”

This week it was also revealed by the Department of the Environment that the number of homeless families in Ireland has increased by 76% since January.

While the official homeless figures take the vast majority of the homeless community into consideration, there is no way of gathering data on the number of Irish people currently struggling to secure affordable housing whom are staying with friends and family on an ongoing basis.

Just shy of 10,000 tenants are moving into rental accommodation per month at a time when the number of available rental properties is at it’s lowest in recent times.

Due to a lack of appropriate emergency accommodation currently available citizen support groups for the homeless have found people sleeping in hedges, in parks, behind shops and in a variety of other places some without even a tent for shelter.

In some cases the government are handing out sleeping bags as a replacement for emergency accommodation which is just not acceptable according to the groups.

“The system is corrupt and it just isn’t working. There is no recovery. We are going backwards to the 70’s. Someone somewhere is planning on making a lot of money on empty buildings but right now there are upwards of 290,000 boarded up buildings and 90,000 on the housing list. The government won’t listen so we feel our protest can make them listen because you cant miss the noise of pots and pans with a passionate crowd to speak for those with no voice.”

Everyone is welcome to join in, and if you find yourself with out pots and pans a good shouty voice will do just fine.

19 thoughts on “Well Get Out Of That Kitchen”