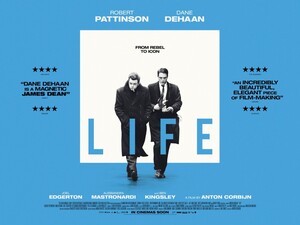 The ambitious Life photographer Dennis Stock (Robert Pattinson) captures a series of iconic images of a pre-Rebel Without a Cause (1955) James Dean (Dane DeHaan) on the cusp of stardom. DeHaan leaves subtlety at the door and goes full-on caricature with an impersonation of Dean so broad that the part could easily have been filled by Jon Culshaw.
The most noteworthy aspect of this Hallmark-style biopic is that Pattinson managed to avoid laughing right in DeHaan’s face, as he turns up his collar and delivers risible dialogue such as “Wanna ride on my ‘cycle?” As a former photographer himself, the appeal of this artist and tortured subject theme is understandable for Anton Corbijn. But there’s very little dramatic tension to be gleaned from anticipating the set-up of the next iconic photograph.
Even if you can look past DeHaan’s risible performance, there’s nothing hidden underneath. Following the toothless A Most Wanted Man (2014) with this weak sauce makes the director’s compelling debut, Control (2007) appear increasingly anomalous. 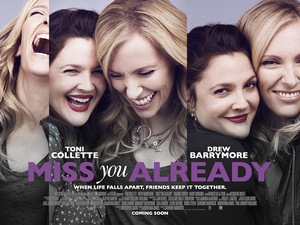 If watching someone’s health slowly deteriorate over two hours sounds like your idea of a good night out, then Miss You Already has it all. From infertility to double mastectomies and brain cancer, this one is actually less fun to sit through than it sounds.
On paper, the story of two childhood friends navigating illness and hardship has the potential for emotional catharsis in the vein of Beaches (1988), but the parts of Catherine Hardwicke’s disjointed movie all work against each other. The jokes aren’t funny, and the neither of the two main characters have the charisma to turn their traumas into ours.
Toni Collette does her best with a deeply unpleasant role, but Drew Barrymore is clearly punching above her weight and Paddy Considine seems to have wandered in from a Richard Curtis movie. The choice of shooting intimate scenes with a camera more suited to carrying out an endoscopic examination does nothing to bolster the absence of emotional heft. Feel-good it’s not.

Also on release from Friday 25th: Captive,  A Girl At My Door,  Mia Madre, Older Than Ireland and Solace

Mark will criticise movies for food. See WhyBother.ie for a closer look at some of this week’s new releases.