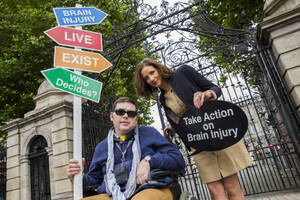 I haven’t done this before, so please forgive the out of the blue email. I’m trying to drum up some extra momentum for an Advocacy campaign ABI (acquired brain injury) Ireland launched yesterday.

My brother Dominic was badly brain damaged after a kite surfing accident on Dollymount Strand in 2011 and my family have been working with them for the last few years.

Yesterday ABI launched the campaign and both my sister in law (Dom’s wife, Tara) and my sister Mary were involved in speaking out. Tara on the Sean O’Rourke show and Mary at the press conference.

The campaign is based on asking the government to actually budget for resources to help the estimateds 13,000 people in Ireland who suffer brain injuries annually. Most of these people don’t have access to rehabilitation or a decent level of help and are left to languish in care homes having been signed off by the system. The government put together a plan for neuro-rehabilitation services in 2011 but nothing has come of it yet.

in short, just asking you to sign the petition [link below] and share with the hashtag #righttorehab.

Introduce a dedicated programme of investment for people with Acquired Brain Injuries (Change.org)

7 thoughts on “Making Us Live Without Rehab”