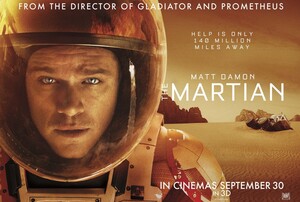 Left for dead on Mars, without any hope of rescue or method of communicating with Earth, botanist astronaut Mark Watney (Matt Damon) gets stuck in to the business of not dying one problem at a time. Worse still, the only playlist available on the laptop is all disco. Bugger indeed.
Alternately titled “The Loneliness of the Long Distance Astronaut” (or “Mars… What is it good for?”) Damon is flawless as the can-do all-American Watney. He carries the bulk of the movie through sheer charisma; there’s a refreshing lack of wacky robots and mawkish communiques to teary Earth-bound relatives (I’m looking at you, Interstellar). Ridley Scott doesn’t try to force his trademark style onto the film, because there’s simply no need. The narrative is compelling enough to sustain the two-plus hours. The Martian is that rare case of a big-budget blockbuster that successfully manages to mix science fiction and science fact. It’s wholly satisfying and, more so than any of Scott’s movies in recent years, it works. 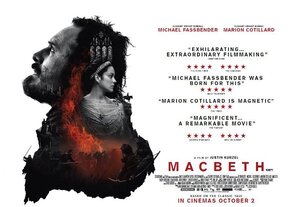 Macbeth is essentially a story about a man who kills a king, becomes king then goes off his nut. It’s definitely not for fans of Shakespeare’s early funny ones. Director Justin Kurzel takes an anti-Luhrman approach to this adaption, remaining largely faithful to the source.
Things get off to a very promising start with an intensely kinetic battle sequence rendered in a haunting, balletic slow motion. Thereafter Macbeth adopts a distinctly set-bound quality that leaves us with a creeping suspicion that we’re watching a play, albeit a very good one. It must be said that some familiarity with the source is essential or the plot will be lost amid reams of mumbled iambic pentameter. Macbeth is one of the better Shakespeare adaptions of recent years. The cast are impressive, and Fassbender is utterly mesmerising throughout, but it might leave you with unwelcome memories of a leaving cert English class.

This dramatisation of Philippe Petit’s highwire wire walk across the towers of the World Trade Centre in 1974 is part bizarre heist movie, part “Christ, I can’t look” scenes of nausea-inducing vertigo. The third act is undeniably thrilling with some exhilarating heart-in-mouth wire-work sequences, but the problem is getting to it. The back story of Petit (Joseph Gordon-Levitt) is fairly unengaging, and attempts to vitalise it with some Jean-Pierre Jeunet-style flourishes come off as cloying instead of charming. As the charsmatic, slightly arrogant Petit, Gordon-Levitt is a disappointment; more Pepé Le Peu than Alain Delon. The Wire isn’t terrible, but it is slightly redundant for anyone already familiar with the sublime Man On Wire (2008).

Also on release from tomorrow (Friday October 2): Ghosthunters: On Icy Trails and The Intern.
.
Mark will criticise movies for food. See WhyBother.ie for a closer look at some of this week’s new releases.