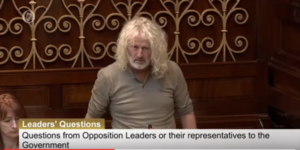 Independent TD Mick Wallace once again raised the sale of Project Eagle by Nama during Leaders’ Questions in the Dáil earlier.

And, once again, he called for a Commission of Investigation into the sale.

Mick Wallace: “If they needed any more proof of the need for a commission of inquiry into the workings of NAMA, Members got it at the meeting of the Committee of Public Accounts last Thursday. Deputy McDonald challenged NAMA about redactions in its responses to questions from the Northern Ireland inquiry and in particular, details of Frank Cushnahan’s conflict of interest declaration to the agency. NAMA’s representatives told the Deputy they could not give them to her and were not even obliged to so do. Answers will not be forthcoming without a commission of inquiry. There have been a great number of questions but there have been absolutely no answers and I still am not convinced the Government wants the answers. Members still do not know why NAMA allowed the Project Eagle process to continue despite the involvement of Tughans and Brown Rudnick, which had been involved in the Pimco deal. Members still do not understand how NAMA could possibly tolerate the idea of selling Project Arrow to Cerberus, which is under criminal investigation in America and Britain. How in God’s name can this be the case…”

Wallace: “…apart from the fact it makes no sense to sell Project Arrow in any event, given that 50% of it is residential and the country faces a housing crisis? It has a par value of more than €6 billion and yet NAMA looks to sell it for less than €1 billion. This simply does not make sense and the process should be stopped. If Cerberus is found guilty, what happens with Project Eagle? Will it be null and void? Will the entire process be undone? When Pimco’s potential criminal violation was found, did NAMA seek US legal advice? When NAMA found out, did it approach the Garda under section 19 of the Criminal Justice Act?”

Wallace: “If it did, when did NAMA so do? Did Lazard express views regarding the continued involvement of Brown Rudnick and Tughans or was it satisfied in this regard? Does the Taoiseach have a problem with the fact that Lazard, which ran the process for NAMA, also was involved with the bank that gave the money to Cerberus to buy it? Does the Taoiseach have a problem with that?”

Enda Kenny: “I already have answered questions on this matter in the House, as has the Minister for Finance. The Deputy is aware two investigations are under way in this regard. He is aware of the interest from the United States. The Deputy has made or has been given information that he has brought to the House and he has gone to the Garda, on which I commend him. However, Deputy Wallace also is aware NAMA is responsible, through the Committee of Public Accounts to this House and the Oireachtas. I understand the Deputy has declined to give witness evidence to the aforementioned committee but he should do so. He has information or has been given information: somebody is supplying him with information, which is fair enough. He has used some of that in giving it to the authorities. However, he is making highly specific allegations here and I suggest he should accept an invitation from the Committee of Public Accounts to appear as a witness and give his evidence to the body through which NAMA is accountable to the Oireachtas and have justified the claims he has made or otherwise. I cannot speculate on a court hearing or hearings that are taking place in regard to Cerberus or any other company as to what the outcome of that might be.”

Kenny: “I suggest to Deputy Wallace that while we can continue this kind of dialogue here on a weekly basis, he has been given or supplied with information and evidence…”

Mathews: “Which the Deputy has given to the Taoiseach.”

Kenny: “I suggest he take that information himself…as a witness before the Committee of Public Accounts…where NAMA can reply to the Deputy in the committee… That is what Deputy Wallace should do… Deputy Wallace can deal with the Chairman, Deputy McGuinness, and ascertain whether his allegations or evidence stands up…That is what Deputy Wallace should do… and the Deputy might well serve the national interest in a major way because whoever is giving him his piece of information, he should then test them as to whether they stand up.”

Clare Daly: “Is the Taoiseach going to allow Project Arrow?”

Wallace: “I have been to the Garda and to the National Crime Agency. I have come into the House and put stuff before the Taoiseach who is ignoring it. What is he going to do about it? He is the leader of this country and he is ignoring serious questions and serious problems I am raising. Why does the Taoiseach not wish to do something about it?

Barrett: “Will the Deputy put his supplementary question? Thank you.”

Wallace: “At this stage, there is a strong belief that Cerberus was earmarked to get this project hail, rain or snow; that the whole thing was fixed up in order that it would get it. NAMA is involved in that and the agency cannot distance itself. The sales process is not much better then the purchase process.

Mick Wallace: “Are you satisfied that there was no collaboration with Cerebeus by a Nama insider, based in Dublin? Because I’m not. And you, if you want the answer, don’t bother your barney asking Nama for the answer because they’re not going to give it to you, no more than they’re not giving answers to the PAC. The PAC members themselves admitted last week that they do not have the authority or power to hold Nama to account. A Commission of Inquiry is the only way that you are going to get the answers we need. The Irish people have not been served well by Nama. It stinks to high heaven and you are involved in the cover-up because you refuse to do anything about it.”

20 thoughts on “‘You Are Involved In The Cover-Up’”