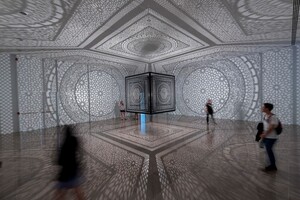 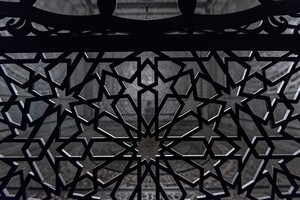 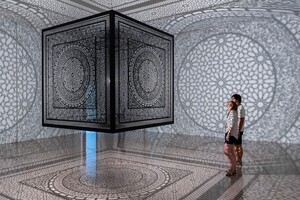 A hanging laser-cut wooden cube illuminated from within by a powerful 600W light bulb casts shadows inspired by the abstract art of Islamic temples across the surrounding walls, floor, ceiling and viewers as they move around the piece. To wit:

Intersections is inspired by Agha’s visit to the Alhambra, an Islamic palace originally built in 889 in Granada, Spain. Struck by the grandeur of the space, Agha reflected upon her childhood in Lahore, Pakistan where culture dictated that women were excluded from the mosque, a place of creativity and community, and instead prayed at home. As she explains, “To my amazement [I] discovered the complex expressions of both wonder and exclusion that have been my experience while growing up.” Agha translates these contradictory feelings into Intersections, a contemplative space of her own making that is open to all.