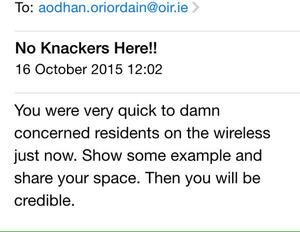 Labour TD Aodhán Ó Ríordáin was on RTÉ’s Today With Seán O’Rourke earlier during which the ongoing stand-off in Carrickmines was discussed.

Further to this, he tweeted:

Just received this email (above). I’ve hidden the sender’s address. This is what we’re up against.

Previously: ‘I’d Urge The Residents To Search Deep Inside Their Conscience’

Meanwhile, In The RDS

‘They Are Not Junkies’