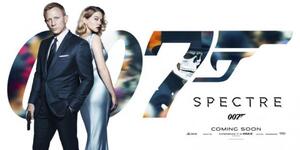 Ever since Casino Royale (2006) achieved the impossible feat of making James Bond relevant again, the franchise has never been in ruder health. This eagerly awaited follow-up to the monumentally successful Skyfall (2012) is going to make more money than Microsoft, but it’s a case of two steps forward, one step back.

Picking up immediately after the events of the last film, Spectre sees Bond (Daniel Craig) fighting a war on multiple fronts. First up is the task of hunting the shadowy Franz Oberhauser (Christophe Waltz), head of a multinational criminal organisation with links to the baddies from the previous three chapters. There’s also trouble at home, with oily new MI6 boss Max Denbigh (Andrew Scott) threatening to mothball the Double O program. Business as usual then.

Let’s start with the positives. Four movies in and Craig’s rough diamond has grown into the quintessential Bond. If this is the actor’s last hurrah (and it’s probably not), then Spectre provides a satisfying resolution to his story arc. Returning director Sam Mendes hits all the necessary beats, from kinetic action sequences in exotic locations to a spectacular set-piece every 30 minutes or so. But the realism of the previous movies has been lost in the quest to make the spectacle bigger, and Spectre starts ticking boxes best left as “optional”.

The action is far too slick, and any sense of genuine peril has all but disappeared. Signs of Brosnan-period cheesy humour are beginning to creep back in, along with the clichéd gimmickry of exploding watches and pimped-out supercars with ejector seats and machine guns. Spectre is still a decent popcorn flick that will please fans of “old” Bond, but those of us who have become accustomed to the new, gritty era will come away disappointed.