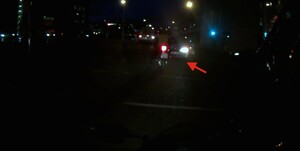 Caught this on my way to work on Friday morning just beside the Convention Centre [north quays, Dublin]. Up there with some of the most dangerous driving I’ve ever seen That junction gets a lot of crazy behavior as the lights on the right only stay green for a short period and the junction is always blocked with traffic to the left. Same place I caught this: (which you previously shared)