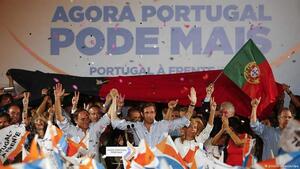 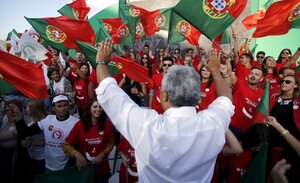 What is the truth behind the alleged coup in post-election Portugal?

This weekend, there was a lot of talk on social media about an alleged coup in Portugal. For example, on twitter, #PortugalCoup was very popular.

However, the truth is that there has been no coup in Portugal, not even a constitutional crisis. But this could change, of course.

How did the whole controversy arise? (Interesting discussions may be found here , here and here.

On October 4th, legislative elections were held for the Portuguese parliament, which has a total of 230 seats.

However, the one party that won the most seats on its own is the right-wing party PSD, which got 89. It is led by a man called Passos Coelho.

What was unexpected in the election is that the centre-left Socialist Party (PS), which can be compared to Ireland’s Labour Party, did not do as well as expected. On the other hand, the “radical left” parties Bloco de Esquerda (“Bloco”) and Communist Party did very well.

Bloco is interesting to watch because it is the Portuguese equivalent of Syriza in Greece and Podemos in Spain. It is one of those new left-wing parties that got electoral traction in Europe during the economic crisis of which we are slowly emerging.

The last player in the thriller is the President of Portugal, Mr. Cavaco Silva. He was elected in 2006 (there are separate presidential elections in Portugal) and he happens to be a member of the right-wing PSD party that got the most votes in the legislative elections. He’s a big political figure in Portugal who has been around for a long time. You can compare him to Margaret Thatcher in his politics and significance, so pretty right wing.

And there’s the rub. Passos Coelho cannot muster a majority in parliament. Indeed, the right-wing parties (PSD and CDS) only have, together, 107 seats. That falls short of the majority needed of 116 seats.

However, together, the left parties (Socialist Party, Bloco, and the Communists) have 122 seats and thus have a majority. Therefore, they could vote down any piece of legislation introduced by a right-wing government.

And here one can see where the accusation that the President conducted a coup comes from. He asked the leaders of the right-wing parties to form a government even though it is the left-wing parties that have the most seats.

However, the fact is that this accusation is wrong. The President just followed tradition: it is always the leader of the party that has the most seats in parliament that gets asked first to form a government. The President, therefore, did nothing wrong or illegitimate in this respect.

But this is not all what fuelled the “coup” story. In his speech, the President made some revealing remarks that were truly extraordinary and deemed very inappropriate, even by some members of the right-wing parties.

What he said is basically that he would not allow in government leftist parties, like Bloco and the Communists, that oppose Europe’s regime of austerity and NATO.

The President effectively conveyed that he cared more about what financial institutions and the European establishment think of the Portuguese elections than what Portuguese people want. Indeed, he declared:

“After having completed a demanding programme of financial aid, which implied heavy sacrifices for the Portuguese, it is my duty, within the scope of my constitutional remit, to do everything possible to avoid that wrong signals are transmitted to the financial institutions, investors and markets, placing in question the Country’s external trust and credibility which, with great effort, we have been gaining”

In short, he doesn’t want parties that challenge the Eurozone and NATO to be in government:

“The observance of the commitments assumed within the framework of the Euro Zone is decisive, is totally crucial for the financing of our economy and, consequently, for economic growth and job creation”.

The parties that the President does not want in government are Bloco and the Communists because they have called for:

“the repeal of the Lisbon Treaty, of the Budgetary Treaty, of the Banking Union and of the Pact of Stability and Growth, as well as the dismantlement of the Economic and Monetary Union and Portugal’s exit from the Euro, and, still further, the dismemberment of NATO, of which Portugal is a founder member”

This is very explicit, and it infuriated many throughout Europe. It has been suggested that it meant that the European Union, or the troika, had concocted a coup towards Portugal, by forcing out parties that oppose European austerity.

But as stated above, so far, there hasn’t been any coup because everything has proceeded normally (except for the President’s incendiary words). Even the left parties agree with this. For example, a leader of Bloco, Catarina Martins, said that the President’s speech was unacceptable not for the decision to give the right-wingers the first shot at forming a government, but for the comments he made against left parties.

But the soap opera is not over, far from it.

What will most likely happen next is this.

Within a few days, the right-wing government will lose the parliament’s confidence, because it doesn’t have a majority.

Then the question will be: what will the President do? Normally, he should give the opportunity to the left parties to form a government, which ostensibly, they would be able to do, because they have a majority of the seats.

But what happens if the President remains stubborn and simply does not want to let the left parties Bloco and the Communists enter government? Then, we’ll have a real constitutional crisis, and depending on how things go, something that one could characterise as a coup by the President.

Sparing you the legal details, an additional problem is that, according to Portuguese law, there cannot be new elections before nine months from now, so governance in the country until then would be unstable and uncertain, to say the least.

If, on the other hand, the President yielded and allowed all left parties to form a government, then, we would have a majority government of the left.

But even then, problems could arise between the Socialist Party, which is centre-left, and Bloco/Communists, which are “radical left”. Would those two groups be able to agree on enough common policies to maintain a government, or would they fail to reach consensus to the point that their government would fall?