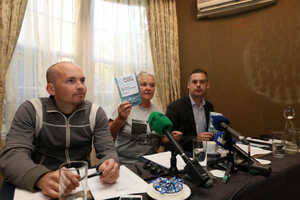 Sinn Féin will announce this week that it has signed up to a number of broad policy principles drafted by those behind the anti-water charges movement and ask its supporters to transfer to others who support the initiative.

Party sources say supporters will be asked to continue their preferences for other parties and Independents who have signed up to the Right2Change policy principles. One source also said Sinn Féin signing up to this approach will create a “new dynamic” for the election.

27 thoughts on “Bonded By Water”