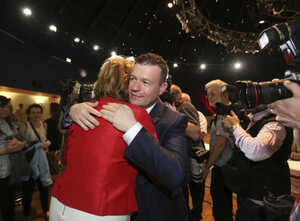 And he has managed to keep at least one principle intact.

Alan Kelly to me was the journeyman Republic of Ireland goalkeeper in our dark days of international competition. That’s Alan Kelly Senior and not his son, who was to follow his father into that position.

These days I’m forced to accept that Alan Kelly, as most known and acknowledged, is Deputy Leader of the Labour Party and Minister for the Environment.

I have to admit a certain ambivalence towards Mr. Kelly. If political success is measured solely on electoral success then Alan Kelly’s performance has been stellar.

Elected to a local authority at the first time of asking, he performed the same trick in being elected to Seanad Éireann. There I served with him never impressed with his particular style of bluster.

In a climate of economic collapse and government unpopularity, election to the European Parliament was the next hurdle that was easily cleared. That no one believed his promise to serve a full term was immaterial.

Election to the Dáil in 2011 also proved to be a doddle. Being appointed a Minister for State on his first day was an added extra. Eamon Gilmore’s resignation as Tánaiste and Leader of the Labour Party opened up a new series of opportunities.

Identifying the Deputy Leader of Labour contest, his victory ensured he would be appointed a member of the cabinet. He would become Minister for the Environment, not because of any natural affinity, but because it provided a place at the top table. This is where it starts to unravel. The belief that electoral success is of itself essence of political success.

In management studies there is a theory known as the Peter Principle where people, especially those whose ascent has been meteoric, are promoted to their perceived level of incompetence. This is particularly true of politics.

Winning elections is one thing. Achieving positive political change another. The Department of the Environment, Community and Local Government offers many potential policies on which a ministerial incumbent can be measured.

Has a better quality of local democracy been produced; more effective planning; improved building regulations; increased housing supply? Has homelessness been addressed? Has the issue of water been put behind us? As a checklist it’s clear that progress hasn’t been made in any of these areas, and in some the situation is worsening.

And that’s before we get to consider the environmental aspect of his brief. Alan Kelly has been the Minister most indifferent to environmental issues since Ray Burke. Given that he is the direct successor of Phil Hogan that isn’t something to boast about.

Not that any of this matters to him. He is likely to maintain his perfect electoral record. He seems well positioned to be the next leader of the Labour Party. With that Irish politics will have produced a perfectly symmetrical example of the Peter Principle.

Making Up The Numbers

35 thoughts on “On Brother Kelly’s Doorstep”