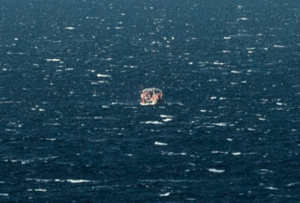 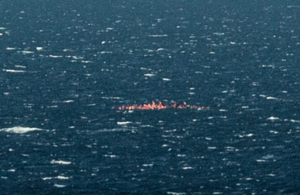 Images taken within a minute of each other yesterday afternoon by American photojournalist Gabriel Green in Lesbos, Greece

Bewildered Student, an Irish volunteer currently in Eftalou on the island of Lesbos, Greece, writes:

Gabriel Green was just doing a favour for a few volunteers driving along the north coast of Lesbos island in Greece yesterday, when he took his camera out and zoomed in on a large white boat in the Aegean Sea.

The volunteers couldn’t locate their binoculars and, to the naked eye, the white boat didn’t appear to have the clear tell-tale signs of being a boat filled with refugees: tiny orange dots.

But, to be sure, Green zoomed in and took a picture. Sure enough, Green could see the boat was full of people wearing orange life-jackets. He told the volunteers he thought it was a refugee boat and that there might be around 200 people on the boat. Less than 60 seconds later, he took another photograph (pic 2).

Looking at this second photograph in his viewfinder, it was clear the boat had vanished and everyone was in the water. Within minutes all you could see from the Greek coast was bobbing orange dots.

It’s being reported that two small boys and a man drowned in the incident and that the coastguard rescued 242 people from the water – a figure that, confusingly in some reports, is said to include other boat rescues from yesterday.

But, as the story unfolds, some people who have been working to help the refugees in Lesbos believe the figure of those who drowned after the white boat sank to be much higher. [Update: dozens remain missing, according to latest reports]

What would have happened had Green not photographed the boat? How many boats have sunk without trace? As a recent volunteer asked: who’s counting the dead bodies lost in the Aegean Sea?

31 thoughts on “A Drop In The Aegean”