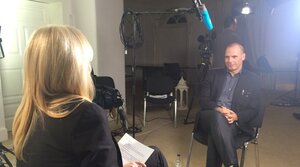 The former Greek Finance Minister’s interview on RTÉ’s Prime Time sought to portray him as an arrogant failure next to the likes of Michael Noonan.

The former Greek finance minister, Yanis Varoufakis, was in town last week for an appearance at Kilkenomics. David McWilliams invited him and had a discussion session about topics ranging from Greece, Ireland, religion and politics. Varoufakis seemed impressed with the event as he wrote that it had been a “happy day” for him and that although it was his first visit to Kilkenomics, it would certainly not be the last.

However, Varoufakis also had an interview with RTÉ’s Miriam O’Callaghan for Prime Time, which can be watched here.

I’m not sure Varoufakis was very impressed by our state broadcaster.

Indeed, the interview shows O’Callaghan repeating the Irish government’s line uncritically. Her questions could have been taken straight from Enda Kenny’s and Michael Noonan’s notebook.

The gist of her queries was that Varoufakis had accomplished nothing in his negotiations with the troika because he was too arrogant.

If you want to get a quick flavour of the interview, someone made a three-minute video of O’Callaghan’s questions here. It’s good at showing that her 20 questions or so are all trying implicitly or explicitly to picture Varoufakis as a failure, and conversely, to show that the Irish government, and Michael Noonan in particular, was so much better at negotiating with the troika.

For example, she asked:

– “Let me quote the Financial Times, they said that you were regarded in Eurozone capitals as the most unbearably garrulous and irritating man they’d ever dealt with.”

– “Did it make sense, whatever your arguments were, for you not to get on with your EU colleagues, because those personality divisions made it even less likely that you would succeed in getting the billions that you needed for your country?”

But O’Callaghan misunderstands how the Eurozone works, how political power operates, and what determines the outcome of negotiations between the troika and countries that received a bailout.

This is not about “personalities” and “who you get along with”. Are we really to believe that the troika gets the finance ministers from Ireland, Greece, Spain and Portugal in a room, they chat and joke together for a few days, and then a troika official says “oh, Michael Noonan seems like a really nice guy, actually we both love soccer and fishing, and we drive the same car, so I’m totally willing to give him a good deal”.

Whereas another troika official says “you know, that Varoufakis, I really don’t like the way he flips up his jacket collar all the time, let alone that he plays the piano, which I never liked as an instrument, so he’s not getting the money”.

It’s incredible that our state broadcaster would convey such a simplistic interpretation of the one issue that has been at the centre of economic policy for the last six years.

Eurozone negotiations between the troika and debtor countries are about power—and that’s it. A negotiator will be described positively by the media and the troika if he does what he’s told, but if he challenges European authorities, he will be pictured as an arrogant or deranged character.

That’s is exactly what Varoufakis tried to explain to O’Callaghan. He asked her, seeking to make the point that it wasn’t about personalities, “but do you think the troika liked Michael Noonan?” To which O’Callaghan was proud to answer: “I think they probably did”.

Oh I’m sure they loved Noonan too, because he did everything he was told to do. But it has nothing to do with personalities.

It is true that Syriza failed to persuade the troika to present Greece with a better deal. Syriza was able to make some small improvements for the Greek people, but overall, they did not succeed in improving the policy package to which the troika is subjecting Greece. They really failed. But the reasons for that have to do with the fact that the troika has overwhelming economic and political power over the Greek government, so it was able to force Greece to accept its terms.

Another key aspect of power relations is that the quality of argumentation has little to do with outcomes in international relations. O’Callaghan asked Varoufakis:

– “If your argument was so self-evident and powerful, why did none of them buy those arguments?”

Well, for about the same reason that when women didn’t have the right to vote, even though they had a pretty good argument to get it, those in power didn’t care. Or when George W. Bush wanted to invade Iraq on zero argument at all, he was able to do it no matter what.

Similarly, fiscal consolidation does not work to revive economies in a downturn, but that doesn’t prevent the troika from doing it anyway.

Varoufakis explained, correctly, that it is Syriza that the troika wanted to crush, because Syriza was providing an example of defiance toward the troika to all Europeans. The troika was scared that this influence could embolden other forces elsewhere, like Podemos in Spain.

115 thoughts on “When Miriam Met Yanis”