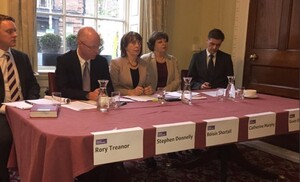 The Social Democrats have called for the setting up of a new body, called the Independent Anti-Corruption Agency, to tackle corruption and white-collar crime in Ireland.

The body would be answerable to a newly established Oireachtas Committee for Public Interest Oversight.

Ahead of the launch, Social Democrat TD Róisín Shortall said:

“The purpose of this new body is to tackle the corruption that has so tainted politics and public life in Ireland. The existing legislation and infrastructure are totally inadequate in preventing, investigating and prosecuting corruption both in public office and in the corporate world. The effective collapse of the Cregan inquiry into IBRC transactions is just the latest example of what isn’t working.”

“Despite the many tribunals of inquiry and commissions of investigation, there remains minimal accountability and few consequences for those responsible for wrong-doing and the result is a perception of a golden circle of insiders who appear untouchable. With the creation of an Independent, fully responsible body, we are proposing root and branch reform of the anti-corruption regime in Ireland.”

40 thoughts on “An Anti-Corruption Agency, You Say?”