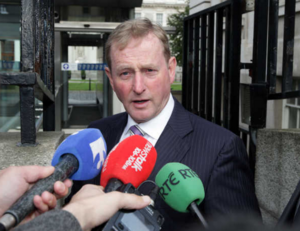 Mark Tighe, in the Ireland edition of The Times, reports:

Enda Kenny raised the case of a child who has survived past his first birthday despite being born with a large part of his skull missing in response to a question about the eight amendment of the constitution.

A woman, a mother of two who has asked not to be named, told The Times that she confronted the taoiseach about Ireland’s restrictive abortion laws at Dublin airport on Friday, November 6, after the two had gone through security together.

She said Mr Kenny asked her what she wanted to replace the amendment with. He told the woman that he had been researching the issue of fatal foetal abnormalities and recently read about a child that had passed its first birthday even though he had a condition that meant most of his brain and skull were missing.

…  A spokeswoman for Mr Kenny declined to comment on the discussion, but admitted that the taoiseach was carrying out research about abortion and fatal foetal abnormalities.

“…The taoiseach is thinking deeply and reading a range of material about the subject. As is well-known, the taoiseach seeks to engage with people, listen to their point of view and inform his thinking with the stories and issues they talk about with him.”

Previously: The Man With One Point

‘The People Decided To Keep That Reference In The Constitution’

62 thoughts on “The Woman With Two Points”