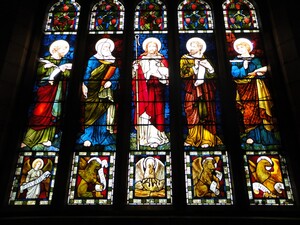 Pray silence for a biblical struggle to find the gospel truth.

In the beginning there was meant to be the word. But before the word was written there were arguments about how it should be written. Who should write the word. Against whom should the word be directed.

It was thought that too long a period of time had elapsed, from the events that had happened, to allow these articles of faith to be written as the best representation of the story as it was.

Different authors approached the subject from different perspectives. Mark’s approach being radically different from all others. Between them they differed in the depiction of events – in what order they had occurred; who had been involved and sometimes what was the moral to be learned.

And thus it was decided that all the accounts should be put together to form a Gospel. For despite differing from each other it was felt that collectively they would reveal a truth.

There were to be critical references of priests and politicians, but not enough to affect their status. Strong words were raised against the moneychangers for their activities in the Temple. Even though they were shamed, they didn’t seem to go away. Before long the moneychanging continued as if nothing had changed.

At times the stories pleased. So many people who were without. So few loaves and fishes. Yet somehow, for a short while, everyone was made feel happy.

However there much in this story that has never been told. It was if a boy had jumped into the life of a man several decades older.

During this interval there were some who had foretold of the Coming. Who told of how the river would become a Flood. Few chose to listen then. It seems many are not listening still.

Those who had come from Rome wanted things to be done differently. While an occasional blind eye would be turned to the odd local idiosyncrasy, this treatise of Rome rule would become the new home rule.

On what each writer of this scripture could agree was that tragic events had occurred, events that required redemption.

Was this to be the new testament? Many wanted to believe yet some could not see how it differed from the old testament.

They had read the Books of Hamilton, of Mahon and of Moriarity, initially with a great deal of hope but always leaving a bitter aftertaste of disappointment.

How would the Report of the Committee of Inquiry into the Banking Crisis be any different?