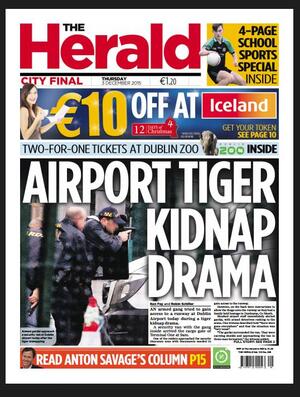 At around 5am this morning two female occupants were taken from their home at Gracefield Road [Artane, Dublin 5] in a white/Silver VW Caddy van partial registration number 09D which was driven around for a number of hours and found by Gardai.

Both females were tied and bound in the back of this van in the vincinity of Chestnut Grove estate, Dunboyne, Co. Meath

At the same time the male occupant of the house was forced to attend work at his place of employment with a cash in transit company and forced to hand over a substantial sum of money in the vicinity of Corballis Road Business Park, Dublin Airport. The incident is not terrorist related.

There are armed Gardai at Dublin airport surrounding a plane. Security alert in place. My London flight is delayed. #dublinairport

The “Clique Of Taxi Drivers” Behind The Airport Strike.