Pick of the week

Krampus opens with a nice little montage of store security tasering a mob of feral Black Friday shoppers with Bing Crosby’s “It’s Beginning to Look a Lot Like Christmas” playing over the top. This gleefully dyspeptic attitude towards the festive season runs through writer/director Michael Dougherty’s home invasion monster movie like arsenic icing in a Christmas cake.

The ever so middle-class Engel family are steeling themselves for the annual redneck in-law invasion. The arrival of Howard (David Koechner), Linda (Allison Tolman) and their vulgar kids brings bickering and bullying, and these bad vibes are sufficient to summon the demon spirit of Krampus. With a supernatural blizzard outside, the Engels find themselves cut off from the outside world and under siege from anti-Santa and his little helpers.

Krampus never takes itself too seriously. With carnivorous Christmas cookies and an eight-foot hairy goat antagonist, it’s a film that is fully aware of its own absurdity. Dougherty has taken more than a little inspiration from Joe Dante’s classic, Gremlins, with black comedy and cartoon violence occasionally giving way to moments of surprising brutality.

The effects team utilise a commendable amount of puppetry and practical effects. Results are mixed (the Krampus creature itself is noticeably inanimate), but charming nevertheless and it’s a welcome antidote from endless CGI borefests. Of course Krampus is ridiculous, but it’s ridiculous fun. 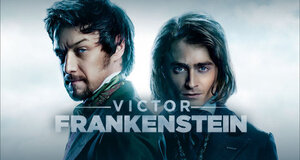 For this “reimagining,” Chronicle Screenwriter Max Landis takes Mary Shelley’s novel, chops it up and stitches the bodyparts together with a glut of other references and influences.

Daniel Radcliffe starts out as a nameless hunchback working as circus freak. Wee Daniel also happens to be a wiz at anatomy, and is rescued from a life of servitude by mad genius Victor Frankenstein (James McAvoy). After a vomit-inducing bit of boil-lancing and the quickest Queer Eye makeover in cinematic history, he’s given a new name (Igor) and a new job as Frankenstein’s apprentice. Victor’s discovered how to animate things with biological energy and a magical fork, and he needs Igor’s anatomical talents to further his research. Meanwhile, bible-thumping DI Turpin (Andrew Scott) is trying to fit Frankenstein to a murder, and there’s something cooking in the basement.

Radcliffe is slowly overcoming the burden of growing up in front of the camera. As an actor, he gets better with each role and is by far the best element in this unholy mess. His enthusiasm and commitment is hard to resist. On the other hand, McAvoy knows far better than to take any of it seriously and overacts with every fibre in his being (say it, don’t spray it James).

Spotting where the various elements have been lifted from – a taste of Tim Burton here, a slice of Guy Richie there, and a healthy dollop of David Cronenberg body horror over the top – is entertaining for a while but eventually becomes distracting. It is instantly forgettable. Just like the monster, Victor Frankenstein is not built for longevity.

TLDR: IT’S ALIVE! But only just. 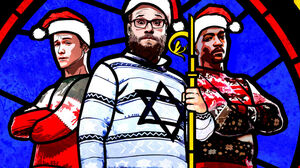 After satisfying his inner thespian in Steve Jobs, Seth Rogen ingests a selection box of narcotics and reverts to type.

The story of The Night Before is basic bromance comedy formula no. 1, involving a night on the town with best buds Ethan (Joseph Gordon-Levitt) Isaac (Rogen) and Chris (Anthony Mackie) and their quest to find “The Nutcracker Ball” – the holy grail of Christmas parties. Hijinks ensue, lessons are learned, values are reassessed, and we all grow up just a little bit. Et cetera. But nobody’s watching this stuff for story.

In all fairness to Rogen, most of the laughs on offer are down to his ad-libbed paranoid hophead schtick. Elsewhere, the jokes amount to lazy riffs on other, better movies and crude pop culture references. Most miss the mark – even the actors look mortified trying to sell “Wrecking Ball” like it’s something off Pet Sounds, but the penny drops when Miley Cyrus makes a late appearance. And sings. Hurrah.

In a nutshell, The Night Before is “The Twelve Pubs of Christmas: The Movie.” If bongs, novelty jumpers and al fresco urination crack you up, then you’ll love this.

It’s clear that Christmas with the Coopers started life as a bog standard family melodrama, but at some point the cracks in Steven Rogers’ (P.S.I Love You) flimsy script were papered over with Christmas wrapping and the film is now being sold as this year’s Love Actually (one was more than enough, actually).

Diane Keaton and John Goodman play Charlotte and Sam Cooper. After 40 years of marriage, the couple have decided to go their separate ways, but Charlotte wants to spend one last Christmas with their family before dropping the bombshell. So we jump from one member of the extended Cooper clan to another as they make their way home on Christmas Eve.

What was intended as an anthology of character studies amounts to no more than thumbnail sketches, without any organic flow or connection between the individual parts. Alan Arkin’s melancholy grandfather is the film’s sole redeeming factor, but the rest of the characters are either underdeveloped (Marisa Tomei’s flaky sister) or utterly charmless (Olivia Wilde’s immature, needy daughter).

By the time they arrive at the nonsensical, happy-clappy resolution, every member of the (admittedly impressive) cast is covered in the stink of mediocrity. The festive setting is a blatant excuse to corral a collection of half-cooked, mismatched ideas into a cohesive whole. It doesn’t come close to working. Like sticking antlers and a Rudolph costume on a dog, it’s still a dog underneath.