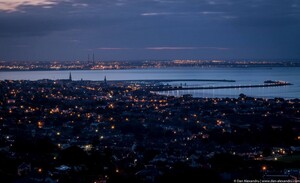 A heartbroken missive to a city that’s asleep.

Pull up a crying chair.

Dublin my love, we need to talk. First of all I need to tell you: you are not London. Your streets are still dirty, the drug addicts still mingle with the tourists on O’Connell Street, and you have no financial district to speak of, whatever you think of that conglomeration of glass and concrete down by Grand Canal Dock, your traffic is still mad — in short, looking at you from the outside I see no justification for you becoming more and more expensive these days.

And yet, in terms of the rental and property market it seems you and your people are under the impression it’s 2005 again and everyone is partying.

It still seems possible to enjoy you as a visitor, but with the current rent prices it almost feels as if you are trying to bar me from becoming a citizen again.

In the last week I viewed half a dozen run-down bedsits and studios, all over €700  rent per month, all situated in cramped 19th-century townhouses that haven’t been renovated since 1982, all turned into sad semi-hostels with shared bathrooms where five or six disillusioned tenants sit in the crying chairs in their “studios”, contemplating their imminent ruin by rent and breathing in the mold and despair of unabashed materialism that permeates your air again, Dublin.

The property pages of the Irish Independent and the Irish Times are flaunting lovely €1.5 million Euro houses on their front pages again, wallowing in the fact that these places are now on sale for a third of their 2006 price, as if that was a good thing and 2008 never happened.

The windows of the estate agents are filled with more and more glossed-up pictures of houses for sale than ever before, red and green “sale agreed” and “sold” stickers on the pictures putting even more pressure on everyone to SELL OR BUY IF THEY WANT TO BE PART OF THE PARTY AGAIN.

Dublin, your city planning is as atrocious as ever, and shortsighted on top. More and more of your families with children are homeless and in June 42,000 people were on the waiting list for social housing, but it looks like only 200 council houses have been built this year.

‘The docklands might have served as an urban laboratory within which to reimagine the city. It was a chance to put talk of creating thriving communities and rich urban environments in the heart of the city into action.

Instead, we are witnessing another round of finance-driven urban development, a fact which speaks to the current poverty of imagination and ambition among those who hold the levers of power in our city.’

Dublin, I still love you, and you have always been expensive, but this time you seem even more like an aging mistress that sails out for a last hurrah with her equally ageing lovers, without regard for what the future might bring. I’m not sure if I’m any more capable to throw my money at you without looking at you in the morning, when the hangover has set in.