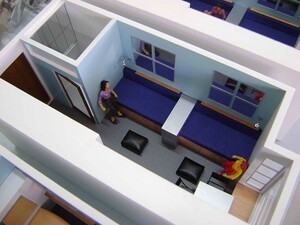 The solution of tiny minds.

One of the best known and more popular songs of the vast repertoire of the late folk singer, Pete Seeger, was the tune ‘Little Boxes’.

It was written and sung deliberately in a children’s nursery rhyme style, as if to confirm the intellect level of those involved in the planning and construction of sub-standard housing, those whose stupidity the song was challenging.

I imagine Alan Kelly singing along to this tune, in that irony free way of his, while in his ministerial crèche at the Customs House. ‘Let them sleep upright’ could become his new cavalier catchphrase.

The audacity of being opposed to shoe box living while re-introducing shoe box apartments back to our housing stock. Maybe Alan Kelly believes what he’s saying. If he does he’s a bigger fool than most of us already believe he is.

The Construction Industry Federation must not believe their luck – To so soon again be given the opportunity to practice their unique form of economic, social and environmental vandalism.

Their lobbying claimed that building new apartment units was not ‘profitable enough’. Note the use of the word ‘enough’ revealing more than it should. The muted acceptance that profits could be made in making human/humane accommodation, just not the right type of gain.

It’s as if the last decade had never happened. We’re now firmly back in the era of squeeze them in, build them cheaply and build them quickly. The era that served us so well.

Maybe I’m being curmudgeonly? I could be focussing on the wrong type of nostalgia. How could I be forgetting those wonderful student parties of my youth. Those daily re-enactments of the ship berth scene from the Marx Brothers ‘A Night At The Opera’; or Graham Norton’s caravan in ‘Father Ted’, or even Cyndi Lauper’s ‘Girls Just Wanna Have Fun’ video.

Maybe I’m overburdening this piece with too many cultural references? I’m fairly sure that Alan Kelly is practically devoid of culture. Other than, of course, the nod and wink culture he seems to be willing back into prominence.

That nod and wink culture, which prior to the introduction of ‘Riverdance’, had seen some of the most deft choreography this country has produced.

There remain some soft shoe, soft sell, geniuses who deserve further public exposure in our cultural firmament. Cllr. Hughie McElvaney from Monaghan is himself one such stylist, especially after his performance on the recent RTE Investigates programme ‘Strictly Fund Dancing’.

If I’m not being curmudgeonly I’m probably being churlish. Any fair minded commentator would recognise how this well timed, well thought intervention by the Minister, clearly illustrates how effective the Labour Party has been in stemming the undue influence of wealthy interest groups on our body politic.

An experience the party, with Alan Kelly at its fore, can put to even better effect as part of the next government.

26 thoughts on “Return of The Squeeze Box”