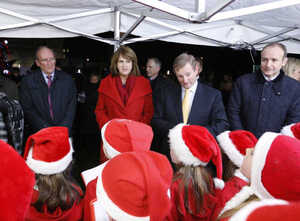 January – The Greek people go to their ballot boxes for the first of two general elections this year, interspersed with a referendum, to decide which of their political representatives would have the right to impose public expenditure cuts in the name of anti austerity.

February – Members of the commentariat are stunned into confusion when The Taoiseach recounts a story about meeting a member of the general public, that happens to be true.

March – In Washington at the White House, during this year’s forelock tugging ceremony, The Taoiseach presents President Obama with a bowl of medicinal shamrock.

April – At a press conference Michéal Martin displays a newly grown beard where he announces “We haven’t gone away you know!,”.

May – In an unexpected development, after a surprising election in the UK, a government is formed by UKIP in coalition with The Greens. Both parties have to make compromises. UKIP drops its objection to wind turbines, just as long as they are all white.

July – Fianna Fáil make a collective approach to the Kardashian family for assistance to meet its female candidate quota.

August – Accusations of political policing reach new heights when Paul Murphy TD is refused a licence to legally operate a bull horn. Gardaí claimed he had exceeded his previously allocated allowance for decibels.

September – The Taoiseach orders 24/7 army patrols at heritage sites at Newgrange and Cashel on foot of a decision by Bank of Ireland to locate ATM cash machines there.

October – Eamon Gilmore publishes a book detailing his role in ending wars in Vietnam, the Sudan and the War of Dun Laoghaire succession.

November – The Taoiseach delivers an erudite speech at the United Nations Conference on Climate Change in Paris. Delegates are taken with his theme “Climate Change is terrible. Someone should do something about it.”

December – Sinn Féin reveal an unpublished section of the Good Friday Agreement, where the British and Irish governments accepted that former IRA operatives should be allowed to engage in continued low level criminality as a cold turkey exercise, to wean them from their previous addiction to violence.

In 2016 we get to stress what real Irishness is all about. If we’re lucky we might even get to hold a referendum.

23 thoughts on “The Year That Kind Of Was”