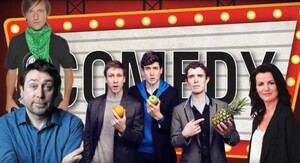 A comedy festival on the wireless?

Produced by Sideline Productions in association with the Broadcasting Authority of Ireland and new Irish comedy website grintageireland.com, more than 40 acts and guests will perform at the Project Arts Centre in Dublin from Sunday January 31st to Sunday February 7th 2016 in 20 shows. On each night two radio performances will be recorded in front of a live audience. The best Irish comedy performers in the The Project Arts Centre over 8 days will be recorded live for RTÉ Radio 1 Tickets are €10 and can be purchased here.