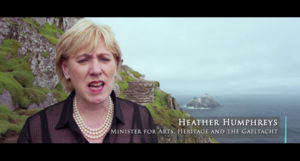 “Minister for Transport, Tourism and Sport, Paschal Donohoe TD, has today welcomed the launch of Tourism Ireland’s phase two of its special Star Wars campaign, targeting fans of the science fiction franchise around the world. It involves a specially-commissioned ‘behind-the-scenes’ film, created during filming in 2014 on Skellig Michael…”

A Kingdom Far, Far Away

Use The Farce Wisely

25 thoughts on “The Force Is Strong With This One”