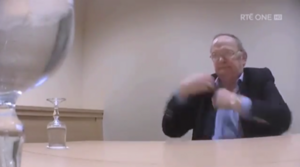 “A mash-up using Cllr Hugh McElvaney and the presenter’s voice as the soundtrack. The movements were chopped up to create a dance.”

Previously: What’s In It For Me?

Hollywood: Remaking Movies You Never Saw Into Movies You Will Never See