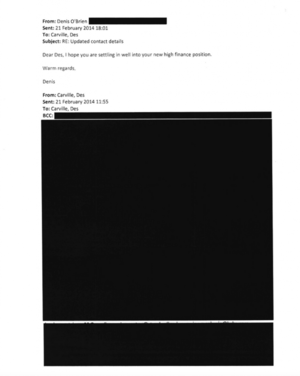 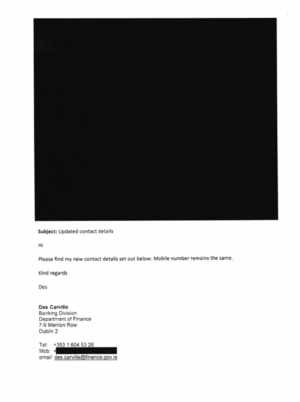 An email from Denis O’Brien to Des Carville at the Department of Finance, obtained by journalist Gavin Sheridan, under the Freedom of Information Act

You may recall how the sale of Siteserv to Denis O’Brien’s Isle-of-Man-based acquisition vehicle Millington in March 2012 came after Davy Stockbrokers and KPMG were tasked with finding a buyer by a subcommittee of the Siteserv board.

Some 18 months after the sale of Siteserv, in November 2013, Mr Carville, a former KPMG employee, joined the Department of Finance as Head of its Shareholder Management Unit.

“For all the world, the inquiry into loan write-offs at IBRC looks like it was built to collapse: the towering edifice, the flimsy foundation, the complex material, the entirely infeasible completion deadline.”

“It ran out of control well before it was due to begin. By estimating a duration of several years, judge Brian Cregan first rendered the whole prospect outrageous. It was the government’s decision to broaden the probe to 38 transactions and losses to the state bank of more than €10m. Now the government claims that an investigation could cost as much as a tribunal.”

“There never were grounds for a probe of that scope, depth, length or expense, nor was one ever demanded. And so the public’s quest for truth runs aground in a legal quagmire of confidentiality , privilege and enormous expenses. How convenient.”

“There were only ever a handful of questions that begged answers in this affair. Did Denis O’Brien, the most powerful businessman in the country, receive preferential treatment in his dealings with IBRC? Was he unduly favoured in his purchase of Siteserv, a utilities service company which was heavily indebted to the bank? Did he get preferential rates of interest on his own personal borrowings?”

“… KPMG could review, as suggested by Cregan, the top 12 write-offs, provided once again there is no conflict of interest. It is the job of a liquidator to investigate the affairs of a bust company. As yet, the evidence is not there to justify a wide-ranging, lengthy and expensive judicial inquiry. Frankly the public should be aghast that one should take place without, at least, establishing a case for such a probe.”

“By the same token, the Siteserv issue should not be buried with this administration. Right now, this looks like a manufactured botch job.”

Previously: Bringing The House Down

24 thoughts on “Return To Censor”