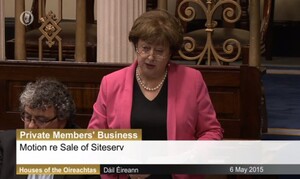 The text of Catherine’s Murphy’s contribution to the Siteserv private members’ bill debate.

Firstly I want to thank Fianna Fail for tabling this issue and for allocating me some speaking time. While Siteserv is at the centre of the current controversy, there is also a much wider issue.

I want in the first instance to refer briefly to an article in the Sunday Times from this week.

In the summer of 2011 – around the same time a decision was made to sell Siteserv – Sierra Support Services, a Siteserv subsidiary, started preparing to bid for contracts to install water meters. Siteserv already had a contract with Bord Gais to service boilers. According to Sierra’s managing director, the company began hiring water-metering specialists in mid-2011.

Remember Siteserv was a company that was haemorrhaging cash – it owed IBRC and the taxpayers €150million – and yet here it was planning for the future involving water metering.

On July 26 2013, a Sierra joint venture, GMC Sierra, won three contracts to install meters for Irish Water worth €62m each.

To understand it, you have to go back to June 2011when a sales process for Siteserv – led by Siteserv itself rather than an examiner– was commenced.

IBRC appeared to take a hands-off approach despite being owed €150million.

A sales team was assembled. This comprised Walter Hobbs, four Siteserv executives and board members, Davy Corporate Finance and a KPMG team.

Somewhere along the way a decision is made to exclude trade buyers. 50 candidates were whittled down to 9 expressions of interest in November 2011.

Once they were signed, an information pack about Siteserv was sent to the potential bidders. This allowed for a due diligence period with a deadline of 5pm on December 7th set for submission of 1st round bids.

We now know that Millington (who was the eventual successful bidder) was not incorporated until December 7th 2011 so given that the entity did not exist – how could it have undertaken the 3 week due diligence period required of other bidders?

Millington could NOT have signed a confidentiality agreement in November 2011 nor could it have received a Siteserv information pack – because it did not exist at the time.

So…if Millington was able to make a bid later in the process than all other bids – how did it come by the information it needed to make that bid?

It’s not something you just do on the back of an envelope, it would have required information.

Is it possible that Millington used a proxy – perhaps Island – to obtain the information on behalf of Millington? If so how does that sit with the confidentiality agreements?

So given that Millington only came into existence on December 7th – the same day of the deadline for the 1st round of bids – can we find out how soon after that did Millington actually submit a bid?

Did that bid follow the 16 point checklist required of the other bids? Or was it the 3 page submission that Mr Dukes referred to when he confirmed that Mr O’Brien had advance knowledge of the sale?

Various sources involved in the process have indicated to me that they always felt that all bidders were not playing from the same starting line.

In the information pack sent to prospective bidders who had signed confidentiality agreements it stated that it should be assumed that the company will be “acquired on a debt free and cash free basis, yet I have had indications that when Siteserv was sold to Millington it actually had €10million on its balance sheet in a combination of cash & debtors.

We know now that Millington paid €40million to IBRC and €5million to shareholders of Siteserv in order to get them to agree to the deal.

Yet others involved in the process were clearly saying they’d have paid more, while independent commentators say that the rushed sale possibly resulted in a less than ideal final price.

Indeed, Ray Nielson from Altrad a potential trade buyer who were excluded from the bidding process; commenting on the need for confidentiality he said
“If you look at any of the acquisitions we have made we keep everything in total confidence. “

He went on to dismiss claims by Siteserv that there was only a “slim” chance that Altrad would stick with its higher bid.

“The reality is that with the level of synergies we’d have with Siteserv, €60m would have been a very low bid for it.. That was our opening bid. If they’d allowed an open fight as we would see it, where they’d allowed in people with synergy, then I think it could have gone for well in excess of €60m.”

Another point that leads to questions is the share activity. At the start of November 2011 the share price for Siteserv is 3 &1/2 cent yet over the course of the month – as the supposed confidential sales process intensifies – the purchasing of Siteserv shareholders increases 53 fold.

In the course of my research a number of names as to who may have been purchasing shares have come across my desk and I will now provide those names to the Director of Corporate Enforcement for review.

The review you’ve commissioned, to be undertaken by Kieran Wallace of KPMG cannot be considered independent no matter how you try to stretch the imagination.

They led the sale. They represented personal interests of many of the key players involved in the sale and Kieran Wallace himself actually led the liquidation of Siteserv PLC.

The Siteserv special liquidators report signed by Mr Wallace is where the disbursement of the €5m to Shareholders was officially signed into reality.

A map of almost of all the key players in the Siteserv saga all leads back to one place and that is KPMG. Let me read you a list:

KPMG – specifically Kieran Wallace and Eamonn Richardson were sued by Mike Aynsley and Tom Hunnerson following the winding up of IBRC.

By having KPMG undertake this review, the Minister has undermined it from the very outset andnobody in this House or outside can have any confidence in this review.

We also know that KPMG work closely on other businesses affiliated to the the person behind Millington including Topaz, Communicorp, INM & the Beacon Hospital.

Siteserv is not the only issue of concern here Minister and I am concerned that the Terms of Reference include a get out of jail card.

It has been widely reported that the review will involve any transaction which resulted in a capital loss of over €10 million but what has been less widely publicised is the proviso that the special liquidator can pick and choose which transactions are reviewed whether they resulted in a €10million loss or not.

There are other elements to the Siteserv transaction that need to be explored and which the terms of the review don’t cover.

For example in the Sunday Independent asked the CEO at the shareholders’ meeting on April 5, 2012 whether the CEO has significant personal borrowings from IBRC. I think it is essential that in any inquiry a look is taken at how those loans played out, given that there was a large benefit from the payout.

The ultimate buyer of Siteserv was one of the largest debtors of IBRC. His loans had expired and he had apparently written to Kieran Wallace in his role as Special Liquidator seeking the same terms IBRC had allowed him which was to pay off his loans in his own time and at the same low interest rate.

My understanding is that it was costing IBRC 7% for their money, significantly higher than the 1% NAMA were borrowing at.

Even if Denis O’Brien’s loans were eventually paid off in full, the interest rate represented a subsidy.

I can’t understand why that was not a factor given that more money would have to be borrowed to purchase the company; as I understand it, it was the state owned AIB that put up most ofthe money for the O’Brien owned Millington to purchase Siteserv even though he had huge loans.

So surely it’s clear minister, that the proposed review is not only conflicted, it is simply not wide enough to provide a true picture. I would call on KPMG to recuse themselves – as per their own code of conduct – and ask you to reconsider the premise of the review and go back to the drawing board.

Yesterday: Giving Back To The Few

Who Are Those Guys?

51 thoughts on “Bringing The House Down”