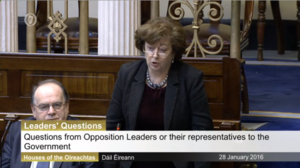 “Tánaiste, over the lifetime of this Government, there have been a number of serious concerns, regarding probity and accountability and today I want to discuss another one that I believe merits scrutiny and that is the awarding of the call centre work for Irish Water to the Cork-based company Abtran. I know you’ll recall that Abtran was the company that got the contract for the SUSI grant system and it came under serious criticism, and rightly so, for its failing and it cost an additional almost €6million. And despite that, it went on to get, it was awarded the property tax contract. And then Revenue had to step in because it failed to cope initially.”

“Yet, after both of those high-profile failings, it was awarded the call centre work for Irish Water. We also know that Abtran has at least 10 other Government and public contracts. Now one of the criteria for the tendering process for the Irish Water contract was that the company had to have a turnover of €20million for the preceding three years. And given that it had a number of lucrative State contracts, prior to the Irish Water contract, the State certainly improved Abtran’s ability to meet the criteria laid down in the process. What’s interesting here is the way it was awarded, the way the contract was awarded and the obvious questions it raises about probity and the awarding of the contract.”

“Now Tánaiste, through Freedom of Information, I’ve established that on the 15th of February, 2012, the then minister [for the Environment] Phil Hogan’s private secretary received a fairly informal email seeking a meeting with Phil in order to lobby on behalf of Abtran. On the same day, at 5pm, an email was sent saying that the minister had agreed to meet the company. On the 27th of February, on the same year, we know that, through the work from Gavin Sheridan’s minister’s diary, that they met, that the minister met both the person who sent the original lobbying email, Mr O’Byrne – the co-owner of Abtran. In March, 2013, that company was then awarded the metering [sic] contract.”

“The Irish Water call centre contract, Tanaiste, as you know, is a very lucrative contract. It’s worth in the region of €50million over four years. And we know through the Freedom of Information that one of the key criteria was that the awarding of the contract, the firm that the contract was awarded to, had to have a proven track record. Now I presume that means a good track record – so the questions I want to ask you are: Are you satisfied that despite a very public failings of Abtran in relation to the SUSI scheme and the property tax scheme that they were still awarded an extremely lucrative contract by the State? Given the criteria? Are you aware that in 2015, late 2015, a State investment vehicle, also invested an undisclosed sum of money into Abtran? Do you know what that money is for? Do you know how much that was? And are you concerned about what appears to be the favouring of Abtran for Government funds?”

Social Democrat TD Catherine Murphy for Kildare North speaking in the Dáil during Leaders’ Questions in the last few minutes.