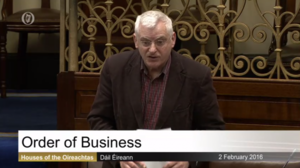 Joe Higgins, of the Socialist Party, this evening

Dublin West TD Joe Higgins addressed the Dáil for the final time during Order of Business this evening, as he won’t be taking part in the general election.

And he was in fine fettle.

Ceann Comhairle Sean Barrett: “Deputy Higgins is leader of his party and he’s probably standing for the last time on the Order of Business and I want quietness and attention for him and to wish you every success in your retirement.”

Joe Higgins: “Go raibh míle maith agat a Ceann Comhairle and, as it happens, I hav two or three brief issues to raise and, with your permission, I’ll raise them. One by one. First, very specifically, Ceann Comhairle, under standing order 26.3, in relation to the business of the Dáil, and we are unable to ask the Taoiseach questions about business, the order of paper, etc, and about arrangements for sittings. So could I ask you Taoiseach what is the arrangement for the sitting of the Dáil tomorrow. Is it intended if it will sit at 9.30am? How long do you intend the Dáil to sit tomorrow? Do you intend to come to the Dáil to say if you are going to the President to seek the dissolution of the Dáil and, in that case, what time might that be? And what will be the arrangements thereof for the sitting? That’s my first question.”

Barrett: “Have you got another one?”

Higgins: “I’m very much within order hear actually. That’s why I brought the Standing Order with me.”

Higgins: “And the arrangements for the sitting? Will you come here to announce when you’re going?”

Barrett: “Joe you have your innocent face on at the moment.”

Higgins: “Taoiseach, you’ll deal with the Order of Business tomorrow is it?”

Kenny: “The Order of Business is approved already.”

Higgins: “I just want to finish maybe, Taoiseach, on your way to the [Phoenix] park, Taoiseach, in case you meet an anti-water charges protest, can I suggest that you take your AK47 for protection.”

Barrett: “I think you’re stepping over the mark a bit there.”

Higgins: “Judging by what he had to say in the Sunday Business Post (sic) he has so much energy he could do with a run around the park before he’s unleashed on the unfortunate people of Tipperary. However, he’d want to be careful because, as a self-confessed addict, he might stage a coup on the way to meet the President. But I think you really should, Taoiseach, tell us what time tomorrow you intend to dissolve, because you have activists all over the country waiting to start their activity, put up their posters….”

Higgins: “I can’t wish anybody here good luck in the next four weeks for obvious reasons, politically speaking, but Taoiseach in the terms of the last five years and what dominated this Dail, would you like to say sorry to the people? For making them pay bankers’ debts? With savage austerity over that period of time?…”