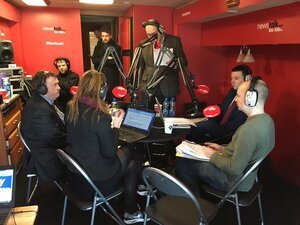 They were discussing Irish Water when presenter Chris Donoghue asked Mr Brophy for his opinion on attachment orders which would allow the State to deduct money from people’s welfare payments and pay packets in order to pay unpaid water charge bills.

Chris Donoghue: “Colm at the moment, Irish Water claims it’s 61%, Paul claims it’s lower than that – the compliance rate. The business model for Irish Water is based on 85% of people paying their bills, that’s not happening. Is it time, in your opinion, for attachment orders to welfare, or to wages, for people who don’t pay?”

Colm Brophy: “I tell you, yeah, what I’m, first of all, 61%, I think it should be full compliance and I think basically we have to reach a point where people need to understand that water is something that costs and therefore, if you don’t pay, there’ll have to be some method of getting that payment back.”

Donoghue: “You’ve arrived at my question and the Government has deferred this decision. Should attachment orders be placed to welfare and wages of those who don’t pay?”

Brophy: “I believe everyone should pay and if they’re refusing to pay, there should be whatever means, including looking at that, as a means to…”

33 thoughts on “Taking From Source”