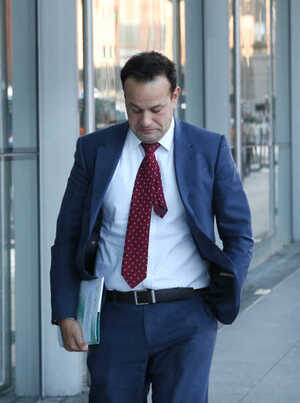 Leo Varadkar’s views on hospital overcrowding and abortion shows he is not fit to be Minister for Health.

This weekend, Niamh Horan in the Sunday Independent had a great interview with Minister for Health Leo Varadkar (see also the related article here).

Ms Horan seems to have a knack for extracting nuggets of information from politicians, having done the same last week with macho-man Alan Kelly from Labour, who boasted that “Power is a drug… it suits me”.

Leo made a number of astonishing claims that cast serious doubts about his understanding of health and health care. In other words, the interview proved that it’s not because you’re Minister for Health that you know anything about health.

First, he stated bluntly that cutting resources to hospitals was a good thing.

You would have expected that a pro-austerity Minister well-trained by public relations advisers would have said something like “Listen, I know cutting funding to hospitals is not good, but we don’t have a choice”.

But no, he said he does like the policy of cutting funding to hospitals because he thinks it makes nurses and doctors work more efficiently when they’re under pressure. Leo said:

“What can happen in some hospitals is sometimes, when they have more beds and more resources, that’s what kind of slows it down.”

Really? And why is that?

“Because they [hospital staff] don’t feel as much under pressure. So when a hospital is very crowded, there will be a real push to make sure people get their X-rays, get their tests and, you know, “let’s get them out in four days”.”

Nevermind if they need more than four days, they get out in four, and we push the problems down the line as usual, when those people will come back to the hospital because they were discharged too quickly and they haven’t healed properly, and their condition may even have worsened.

What Leo said is simply not true, as anybody working in a hospital will tell you. When you’re under pressure, you speed up, and you make mistakes and you cut corners. Medical staff work with people’s lives and they need to take the time needed to do what needs to be done.

I can hardly imagine Leo himself on the operation table telling the surgeon and his assistants: “hurry up you don’t have time to do it 100% because you need to go meet other patients”.

Nevertheless, Leo made the incredible and wrong claim that “more beds and more resources do not relieve overcrowding” in hospitals.

It is true, however, that more funding is not the only solution to the health care system. The main problem is the type of system we have.

Anybody working on health care needs to know something: a tax-funded public health system like the NHS in the UK is the best system that exists and it is what we should aspire to. It is both cheaper and it is better for health.

The reason is that in privatised systems, there is a lot of bureaucracy involved and that’s very expensive. Armies of clerks and office workers need to compute the price of every treatment, process claim forms, reject claim forms to try to save money for the insurance company, send glossy letters to insurance policy holders, etc. All that costs a lot of money and this is why private for-profit systems are more expensive than public ones. It’s very well-established through health policy research.

There is therefore no reason for Leo not to know that. Why is he privatising our system then? It’s not because people want that.

Indeed, the one issue that is the most important to Irish people, poll after poll, is health care. Therefore, the government is completely at odds with the population in that it acts to worsen the trolley crisis, cut funding to our hospitals, increase crowding in our hospitals, and privatise the system even if this is amounts to a waste of money.

The second point Leo made in the interview is about abortion. Niamh Horan pushed him but he simply refused to give any answer that would mean that he wants to liberalise abortion laws significantly.

Leo has stated that he is “pro-life”—that means, cutting through the spin, “anti-choice” or “pro-the government deciding for women and their partners what’s best for them”.

This means that the Minister of Health does not want health care in this country to provide an important service for women’s health.

In fact, it appears that Leo doesn’t even understand the issue of abortion. Here is the exchange with Niamh Horan:

Niamh Horan: “Do you believe abortion in Ireland is a class issue?”

Leo Varadkar: “No [laughs]. I don’t know what that question means.”

Horan: [I explain that a woman who is wealthy and can afford to travel to the UK has greater access to a safe abortion and medical care than a woman who has no access to similar funds]

In sum, what the above reveals is not so much ideological differences as a failure to know and understand the basic facts about health and health care. If we agreed on the basic facts but had an ideological argument, at least, we’d all be living in the real world. But here we have a more fundamental problem with getting the facts straight.

It reveals incompetence of the highest order.

A Minister for Health who believes that overcrowding is a good thing and that refuses to provide abortion services like everywhere else in the Western world is not a Minister of Health.

Requiem For A Dream

57 thoughts on “The Wrong Diagnosis”