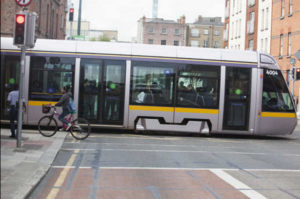 Transdev, which operates the Luas, writes:

The strike is about pay, terms and conditions. Luas employees are demanding various increases and on pay alone these demands range from 8.5% to 53.4%. The company has paid year on year pay increases since 2008 of between 1.25% to 5% and an annual bonus averaging €2,500.

The cost of these current demands would add 40% to the annual wage bill or €6 million per year, €30 million over five years.

“The company [Transdev] has failed to show any initiative in the effort to find an agreed resolution to the dispute. Management representatives merely reiterated a previously stated position that our members cannot expect to receive pay rises over the next five years and that any rise that might be granted would be limited to an increase in the Consumer Price Index.

“…. Due to the intransigent position displayed by management it is certain that the scheduled work stoppages will proceed on Thursday, 11th and Friday, 12th and Thursday, 18th Friday and 19th February. The workers are conscious of the inconvenience these stoppages will have on their customers but believe they have no option but to conduct this industrial action.”