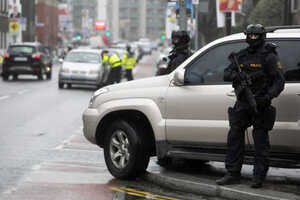 The response to the recent gangland killings reveals a complete lack of understanding of drugs and related crime.

The recent killings in Dublin involving drug gangs have received much media coverage. Yet, the reporting is so misleading that a few clarifications are in order.

The main reaction on the part of politicians and the media has been to blame Sinn Féin almost immediately, using the killings as a useful diversion from the issues that should dominate the electoral campaign.

Then, many calls were made to adopt a tough approach to drugs and gangs and to boost Garda resources, giving them more and better guns.

This reveals a complete lack of understanding of how to deal with the problem of drugs and related crime.

In particular, two effective solutions have received virtually no attention: (1) legalisation of drugs, and (2) reducing drug money laundering by American and European banks.

Making drugs illegal does not work and it increases violence. When drugs are illegal, drug dealers who disagree over unpaid debts or about how to divide neighbourhoods to sell their drugs will not ask the Garda or a judge to arbitrate, because they’ll be put in jail. So, they fight it out on their own with guns.

Neither is police enforcement very effective to deal with drugs, as research has shown again and again. This is because even if, say, police officers are able to arrest drug dealers, others will simply emerge to replace them, as long as there is a demand for drugs. If the police seize drug shipments, the drug lords will simply produce more and send more, as long as there is demand.

Therefore, the best way to reduce drug problems is to offer treatment services for addicts to reduce consumption. If there is no consumption, there is no market, and no gangs will ever emerge to sell drugs, and we can all say goodbye to the violence.

There is a well-known RAND study (a US-based think tank) that ranked four solutions to the drug problem in terms of their cost effectiveness. Treatment was the most effective, and the others came in as follows:

But under austerity, drugs programmes have been cut by 37%. Also, unemployment zoomed, leaving drug dealing as an attractive option for those living in communities where there are no good jobs.

Thus, giving more powerful guns to the Garda is not a good solution. Do we want to become like the US, where cops have become hyper-violent?

The Health Research Board did a study of the drug market in Ireland recently. The report confirmed the above. It examined Customs officials’ drug seizures, which numbered 1378 for the first half of 2009.

But 90% of those were either weed or hashish, and 90% were of less than 28 grams. Weed and hashish for personal use are not dangerous.

The report concludes with an indictment of police and customs enforcement, stating that:

“Our research showed no evidence that drug availability was affected for any significant period because of successful law enforcement.”

For those who worry that legalisation would lead to a massive growth of drug use, the experience from places that have liberalised their drug laws (for example, Portugal) shows that there may be small increases of consumption of some drugs (e.g., marijuana), but overall it’s absolutely not true that there is a massive rise in consumption. There’s an excellent report on Portugal’s experience here .

Also, big traffickers and producers would still remain illegal, and there wouldn’t be any advertising, and you could only buy drugs in specific stores. So there wouldn’t be packs of weed or heroin on sale on the shelves at Tesco or Spar.

As I wrote here a few weeks ago The benefits of legalising drugs can be summarised as follows:

1. It saves the State a lot of money because the police don’t have to run around the country arresting students smoking pot or heroin addicts who are homeless and simply have an addiction problem.

2. It generates taxes for the State because drugs is now a legal business, just like tobacco and alcohol. It doesn’t mean we think that drugs are healthy products, it just means that the industry becomes tightly regulated. It thereby generates tax revenues for the exchequer, which can be invested in treatment for addicts.

3. Violent crime decreases. When drugs are illegal, they generate violence.

4. Quality is much better: under a regulated system, the State can regulate the quality of the drugs, as it does for all foods and alcohol. Therefore, drugs become less dangerous.

5. Drug problems become public health issues, not criminal issues. This means that addicts are treated for their addiction instead of getting harassed by the police and arrested.

In addition to legalising drugs, governments should better regulate banks. According to the best estimates available, worldwide, about $220 billion of drug money is laundered annually through the financial system, which is dominated by Western banks.

However, only about 0.2% of all laundered criminal money is seized and frozen, as governments have other priorities than regulating the banking industry, which benefits from this extra liquidity.

A few years ago, the chief of the United Nations’ Office on Drugs and Crime even lashed out at bankers’ habit of laundering drug money, declaring that “At a time of major bank failures, money doesn’t smell, bankers seem to believe”

So we need to force banks to adopt better safeguards. By now we should all know that “light-touch” regulation of banks only leads to big problems, so why not regulate them forcefully for drugs as well as borrowing and lending?

Julien Mercille is a lecturer at University College Dublin. His book on drugs can be found here. Follow him on Twitter: @JulienMercille

Requiem For A Dream

116 thoughts on “A Phoney War Without End”