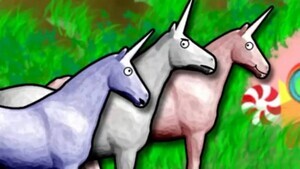 Jason Steele of Filmcow is currently funding via Kickstarter to create the fifth and final episode of the web legend that is Charlie the Unicorn. Sez he:

When the original “Charlie the Unicorn” video got such an enthusiastic response after its release (way back in 2005!) I decided to write a roadmap for the series. In the time since then I’ve produced three additional episodes, all following that roadmap. I love the series, and I really didn’t want to mess up what made it special by pumping out a bunch of episodes without good reason. If I did that, it would be Garfield.  Every episode would involve Charlie throwing himself into a pan of lasagna and then assaulting a dog. What a world that would be.

So that’s a thing that’s happening then.

Here, in case you haven’t already watched it several times – is the series so far.

4 thoughts on “Charlie The Unicorn: The Finale”