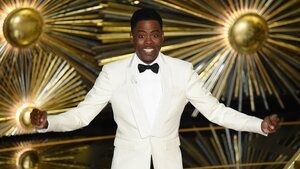 2. Sadly Lenny Abrahamson, Ed Guiney, Saoirse Ronan, Michael Fassbender and Emma Donoghue all lost out in their respective categories, but the attention can only benefit the Irish film industry. And sure it’s an honour just to be nominated. *Unclenches teeth*

4. The last time the Academy split the Best Picture/Director combo was in 2005 when Ang Lee’s Brokeback Mountain lost out to Mike Figgis’ Crash.

5. The big surprise was Sylvester Stallone losing Best Supporting Actor to Mark Rylance. On the other hand, DiCaprio was practically on his way to collect the Best Actor statue before Julianne Moore had opened the envelope.

6. The official theme of this year’s ceremony was “We all dream in gold.” Unofficially, it was “The inherent racism of Hollywood.” Academy president Cheryl Boone Isaacs gave a “mea culpa” speech promising how things will be different next year

7. And host Chris Rock’s (above) opening monologue practically wrote itself (highlights included “If they nominated hosts, I wouldn’t even get this job”). Cue shots of the audience looking more uncomfortable than a scout troop at the taping of the 1975 Jim’ll Fix It Christmas Special.

9. Weirdest moment: Sadly no John Travolta or Terence Howard Lady Gaga dressed as Vegas comeback special Elvis was as weird at it got.

10. Thank you count – Spouses/parents: 19. Agents: 3. George Miller was this year’s Wes Anderson with 6, and Ennio Morricone gave Harvey Weinstein a shout out, ensuring no PAs were hurt and restoring balance to the universe.

11. The Hollywood Reporter’s Brutally Honest Oscar Voter Ballot proved that academy members continue to vote in categories without watching all the nominated movies (Daniel Berger’s response is worth a look), and that nobody knows the difference between sound editing and sound mixing.

12. Broadsheet Verdict: A bit safe really. But at least there wasn’t a song-and-dance number.

Highlights of the 88th Academy Awards are on RTÉ2 tonight at 9pm.

This Trailer Park special was brought to you in association with the Angelus and Kissable Fierce by Katie Price – “a perfume for the evening”.