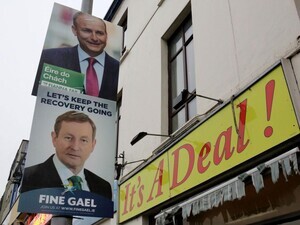 Until a majority of Irish people shirk the media narrative and realise that their fortunes are not dependent on either Fianna Fáíl or Fine Gael, we will have no real progess as a society.

It’s done and dusted. GE16 has come and gone and with it our understanding of what constitutes our political framework for the foreseeable future.

The electorate returned a somewhat confusing mandate but a mandate which must be respected nonetheless.

But there is a difference between respecting a person’s choices and legitimately questioning the reasoning behind those choices.

If you look back to 2011 and recall the decimation that was wreaked upon Fianna Fail as punishment for the political terror they had inflicted upon people in the period 2007-2011 it is really hard to understand how many of those people, just five years later, saw fit to wave a white flag and forgive Fianna Fáil their sins.

There has been lots of talk in recent days of borrowed votes being returned to Fianna Fáil.

As I canvassed over the past few months I was convinced turnout in this election would be amongst the highest ever recorded. People were angry; they were determined to punish this Government. It never for a moment crossed my mind that the punishment they intended to inflict would be a return to the aggressor of the recent past.

While many told me they wouldn’t bother voting because they didn’t see the point, I was enthused by the amount of people who were politically exercised. Unfortunately when it came down to it, those who were apathetic stood by while the establishment traded power between them.

We got near to change, there was certainly a shake-up of sorts but the people who opted out of the voting process were complicit in allowing tweedle-dum and tweedle-dee to keep their hands on the levers of power for at least another election cycle.

I’m incredulous that we’re now seeing Fianna Fáil being touted as some bastion of political reform or possible saviours of this political stalemate we’re currently witnessing.

I want to scream from the roof-tops that this is the same Fianna Fail who brought us to our knees, who drove our young people from this country in their thousands; that lumbered our children and grandchildren with debt burdens that were never ours or theirs to bear; yet here they stand as an almost white knight, with a mandate given to them by citizens with apparent goldfish memories.

I take the point that it is their second worst ever election result but I take no solace in it because following 2011 it is incomprehensible to me that they should regain seats lost just 5 years ago when really it should have been a further nailing into the coffin of the type of politics that has brought us to where we are today.

For my own part I put my hat into the ring and while I managed to poll ahead of two sitting TDs and take 5320 votes it wasn’t enough on this occasion and I finished 5th in a 4 seater.

I’m good with that and I’ll take the defeat on the chin and move forward but I’ll find it far harder to accept that people returned their vote to Fianna Fáil as some perverse means of punishing Fine Gael and Labour.

Until a majority of Irish people shirk the media narrative and realise that their fortunes are not dependent on either Fianna Fáíl or Fine Gael, we’re going to continue in a form of political limbo where we swing mercilessly between the two parties over electoral cycles with no real progress for our society as a whole.