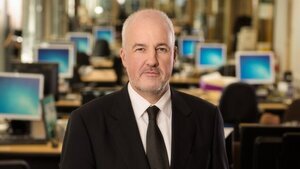 Cathal MacCoille: “Our economics correspondent Sean Whelan has been looking at the figures involved. Morning, Sean. First of all, let’s take a look at something very short-term. Say, they scrapped, or put a freeze on payment of water charges for a year. How much would that cost?”

Sean Whelan: “Well Irish Water were hoping to get around €270million from domestic bills. They say they’re going to raise about €111million by the end of this third billing quarter and when they added the fourth everyone, because not everybody is not paying, they’re going to fall short of that but you’re talking well in excess of €100million, maybe €150million that they might collect. But, in terms of their own accounts, if you stop water charges for a year, you’re down €270million, so they’d have to come back, looking to the exchequer for that sum, for one year.”

MacCoille: “Now, what about five years, which is the Fianna Fáil proposal, in other words nobody pays any bills for five years and then you start paying?”

Whelan: “Well then you multiply that by five and add a small bit for inflation I guess and you’re looking at up around €1.5/6billion in lost revenue to the company which would then have to be made up by Exchequer funds, in other words, taxpayers’ money. There’s also, I should stress, a cost involved in doing, stopping the billing thing because they’ve built up a billing system which they’ve spent a lot of money doing. There’s a couple of hundred people in Micheal Martin’s constituency employed in the billing process – what happens to them? They’re on a contract basis, outsourced from the company but there’s uncertainty about that. There’s a cost in shutting down a billing operation like that and there’s also a cost – and quite a considerable cost in starting up a billing operation again because it’s a large machine. It takes time to crank up. It takes time to crank down. And cranking it up again would be even more costly.”

MacCoille: “So the rough cost of a freeze for five years would come to what?”

Whelan: “Plus the costs of shutting down and restarting the billing network, you’re talking in the tens of millions there.”

MacCoille: “All right. Now the big option which is abolishing Irish Water completely and replacing it with some kind of State service or handing it back to local authorities. Something the Taoiseach ruled out but anyway, it’s up in the air. If you’re to abolish the whole thing, what charges the semi-State company, everything, how much would that cost?”

Whelan: “Well this is where it starts to get very costly and I suppose contentious in how you allocate the costing there. The Irish Water, one of the justifications for it, it would drive down the cost of doing business through efficiency gains, rather than having 31 local authorities trying to process the investment, you have a single authority. They claim that they can drive down the costs by about €270million a year, that’s another €1.6billion which they say comes in efficiency gains over the next five years.”

MacCoille: “I suppose you could say that if you had a section of the Department of the Environment or some State service, they could do it aswell?”

Whelan: “Well what’s the difference? You already have a company there, a structure. Are you going to set up a new quango from scratch? How much is that going to cost? What kind of disruption is there going to be in transferring across? Remember there’s going to be a lot of legality involved here. They’ve transferred the assets and liabilities of local authorities into a new corporate structure. That took time, money, hassle, expense. Trying to disaggregate those various bits of the company would not be easy. And you’ve got two components here in settting up Irish Water. You’ve got all the capacity and capabilities of the local authorities that were doing the water management but you’ve also got an entirely new set of capacities that only exist within a single entity, Irish Water. So either you get rid of that and that’s where you’re going to lose these, these efficiency gains…”

MacCoille: “We’re running out of time. €7billion was the Irish Water estimate. Is that right?”

Whelan: “It’s well, you add those two figures together and you’re up to €3billion, €3.2billion, then there’s the cost of a straightforward shutdown which is €100million on top of that and then there is the potential loss of an investment programme which is around €5billion which is planned. Now one of the things that the company says you need to be careful about is the track record of State investment in capital. We’ve seen, in the last six or seven years, the capital budget was cut to shreds in order to free up money to spend on current spending. So, paying social welfare, paying wages for teachers and guards and all that sort of thing, takes priority in spending. If we want to invest and we do need to invest, having it at the mercy of politicians, deciding on a whim, also if they, if there’s pressure to spend things, they can always spend on the things you see, like hospitals…”

MacCoille: “We’re right out of time. €7billion, right or wrong?”

Whelan: “It’s close to that, it’s close to that. I’m not sure it’d be fully €7billion, the company make a fairly convincing case that it would be quite substantial and it would have to be found somewhere else.”

Ireland is at risk of becoming ungovernable. My column looking at economic, societal and political factors https://t.co/brJQKHSq28

86 thoughts on “Smell My Fear”